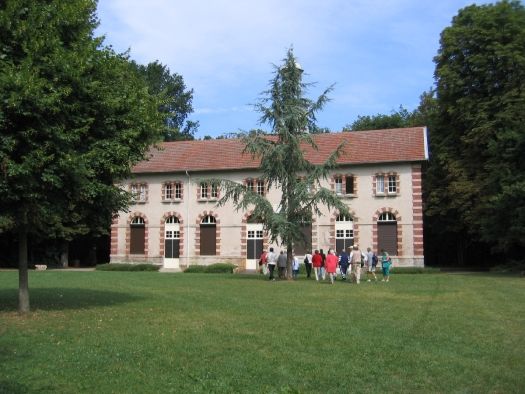 Located in the site of Sevran, the museum retraces the history of gunpowder. This original heritage vestige includes a museum devoted to the strategic importance of the factory site and specializes in the following: various laboratory instruments, tanks, boilers and machinery for mercury-pyrotechnics-blow-up and packaging bottles…

Poudrerie Nationale is located near the edge of Parc de la Poudrerie. This museum retraces the history of the gunpowder factory which operated until 1973.

The Imperiale Poudrerie and thereafter National Sevran-Livry operated for a century. During the First World War, 3,300 workers were employed there and assured 28 tons of powder production per day. The factory was built on a large part of the forest of Bondy, the trees were cared for by the gunpowder men. It was one of the reasons that led to the development of the site into a national forest park with 137 hectares located in the towns of Sevran, Villepinte, Livry-Gargan and Vaujours in the years 1974. The site has been classified by the Department of Seine-Saint-Denis.

In 1865 Napoléon III signed the decree to create the Poudrerie Impériale of Sevran destined for the trade of gunpowder. The site was chosen for its ideal location in proximity of Canal de l’Ourcq, and a railway track and was sufficiently far away from Sevran and Livry-Gargan. This gunpowder had been the first example in France completely powered by the force of steams engines. In 1914, 600 workers worked there, and then 1,200 worked there manufacturing ammunitions some time later. During the Second World War, the factory worked at full speed to manufacture 500 tons of powder in May 1940. The factory was subsequently occupied by the Germans who emptied it of the machines. The factory remained in service until 1973.

The park and architecture: a unique setting

In Parc de la Poudrerie, various constructions of different shapes and sizes were installed there. These were the last vestiges of the factory constructed between 1867 and 1873, under the direction of the engineer Maurouard. The buildings were masonry coated with some corners and frames of brick windows. Designed by fabrication of "black powder" or gunpowder, the factory used, since 1873, for the first time, the motive power transmitted by high-energy cables, between the building equipped with steamed machines and the powder factory. In the first factory, the pavilion mounted by a small clock tower and occupied today as the welcoming hall for the forest park visitors, the cables system circled in the hemicycle from the power plant. In the second one, made up of two buildings and linked by a bridge (Boris building), a linear circuit was installed. The cables passed through the arches that mark one of the alleys of the park.

The relatively flat terrain is punctuated by dirt berm. It’s all about merlons placed on different production units, in order to avoid the fire from spreading... The site is made up of about 300 buildings, from which just about 30 remain. From one of the main ones you can see the entrance of the pavilion (Cour d'honneur), some administrative offices and some housing accommodation, located place Henri-Joseph Dautriche, as well as annex buildings, and one of them houses the Museum of gunpowder, techniques and Armement Sevran.

Guided visit from Monday to Friday on prior inscription. Open visit on Sunday afternoon from 2.30 to 5.30 pm. From March to December (close every Sunday in July and August).

For heritage days, the museum Musée de la Poudrerie will be open for visitors.