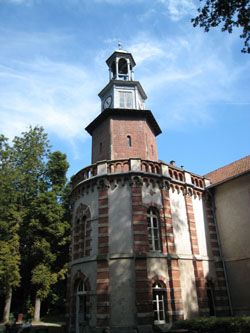 Sevran will seduce you with its past heritage: from the Kodak factory to the laboratory of Alfred Nobel and from the castle of la Fossée to the first railway station built in the region of Paris.

Sevran from the latin word "severanum", Severus domain, refers probably to an ancient Gallo-Roman farm. The earliest mention of the village dates back to the early eighth century. In 1060, the monks of Saint Martin des Champs settled there and allowed all the inhabitants (who had to wait until 563) to craze their animals there. A century later, Saint-Vincent de Paul resided several years in Sevran. The revolution did not effect this place much.

In 1803, works began on canal de l’Ourcq and was opened for navigation in 1822. The village was invaded by the Prussians in 1871 who pillaged and burned it. After the war of 1870, the site gradually gained in importance, favored by its geographical location and the railway. The Ourcq canal was also important for the expansion of the city. In 1865, the Ministry of War decided to create a national gunpowder industry, which is today known as the gunpowder museum- "Musée des poudres". An entire industrial area was developed here from the late nineteenth century.

Your steps will inevitably lead you to the banks of the canal. Sevran, in the late eighteenth century had access to water via a small river called the Morée. In a locality known as “Le Soucy”. villagers pumped water from a shallow hole called “the tears of the earth”. Luck was on their side when it was decided that the building works for a canal passage intended for supplying water to Paris would pass through the south of the village. In 1924, the Kodak Company bought about fifteen hectares of land for the establishment of workshops and photo development work were transferred from Paris to Sevran. But the Kodak company definitively left Sevran in 1995.

The Fayet fiefdom castle is an elegant property charaterised by typical country homes built in the eighteenth century. This big house hosted famous guests such as general Bonaparte, welcomed by the owners at that time during the inspection of canal work carried out on the Ourcq. The most distinguished owner of the domain was Alfred Nobel. Today it houses the sevran town hall and its administration. In 1881, Nobel moved his laboratory to Sevran. Behind the house, he constructed a building made of brick and glass for his laboratory in the adjoining courtyard. He sold it off in 1892. Sevran was fortunate to count him among its inhabitants for twelve years and retains vestiges of his stay. In December 1996, the town  erected a monument dedicated to Nobel in one of its squares. It was designed and created by the sculptor Khachik Kazan who baptized it “elevation”. It is a sign, a metaphor, for hope and the desire for peace expressed by Nobel in his will.

Natural heritage and place of worship

Construction of the gunpowder factory museum in Sevran-Livry was decided in 1865 by Napoléon III. It operated for a whole century from 1873 to 1973 and counted up to 3300 workers. Today, it is a museum: Musée de la Poudrerie which you will discover in the forest park. Nobel worked on an invention to replace the black gunpowder for modern gunpowder. The French government refusesd to supply the armies with this powder and Nobel finally dealt with the Italian government, which at that time was part of the Triple Alliance against France. A violent press campaign against the chemist led him to leave the Hexagone in 1891 and he settled in Italy.

In 1891, Westinghouse, an American group, acquired five hectares from the king’s wood and from Rougemont wood in Sevran to build a factory making railway brakes. This implementation attracted so many people that the municipality decided to build a new neighborhood, Freinville. Shortly before 1900, under the name  “baleine”, the first railway simulateur was built. The creation of this new district included the edification of the church “Sainte-Elisabeth of Hungary”. Archeological surveys have detected in that location a Merovingian funerary sanctuary. The church Saint Marin dates from 1551, but the side-vaults were not built until 1935. During the terrible war of 1870, the Prussians profaned the sanctuary; washed themselves in the baptismal font dating from the eighteenth century and used the altar as a dining table. In 1981, fire ravaged the first bay.

The fiefdom of la Fossée, mentioned after1552, originally said to be part of a farm and adjoining buildings. The present castle was built in the early nineteenth century and accommodated the convalescent home of peacekeepers.

Organize your visit in the town:

Consult our list of theme-tours in proximity of Sevran all year round: Factory tours, walking tours in the neighborhoods, cooking workshops, boat trips as well as plenty of ideas to discover Paris and the cities in Ile de France.