The Garden of Dragon

The garden of Dragon is a free play area for children in Parc de la Villette. It includes a large sculptural steel-Dragon to climb on and rocking toys for smaller children.

History of Dragons at la Villette 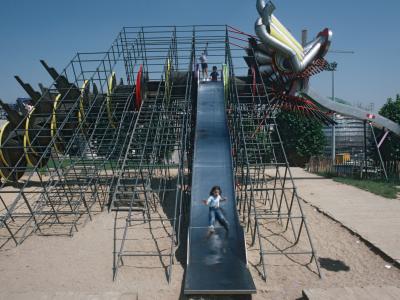 The dragon has existed since long before the creation of Parc de la Villette. This dragon created in the seventies was designed by François Ghys. Installed and renovated in 1989, it became an integral part of the park with its own designated garden (created by Ursula Kurz). The dragon was initially made of wood and metal with a slide at head level and a second one further back and slightly lower. Children could climb in two ways : either by the steps allowing parents to accompany them to the entrance of the big slide or by going in through the tail moving upwards from inside, climbing the obstacles on the spine of the steel dragon up to the mouth where it was crowded with children waiting for their turn to come down. 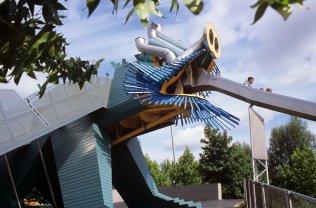 In 1998, Ursula Kurz was once again called upon to imagine and create the transformation of the famous Dragon but this time she had to develop and renovate it to match European standards in terms of children’s games. It is the most family-frequented place. Ideally located near the Cité des Sciences, close to the vast green space in the park where you can picnic close to the playground and where the children can safely play under your watchful eye. The big steel dragon is thus a delight for both youngsters and  parents.

The renovation has brought the games closer together, smaller games for smaller kids, benches for parents, swings and rocking chairs, inclined or vertical walls, climbing ladders. The garden of the Dragon has always been popular, its free access, the variety of games offered, all is safe and secure…

2007: The « old » dragon was closed and became inaccessible for security reasons. Nearly 8 years of renovation work were necessary after many ups and down in order to bring back the steel dragon, much desired by a generation of nostalgic parents.

A third generation Dragon in the garden in 2015

The dragon is dead, long live the Dragon! 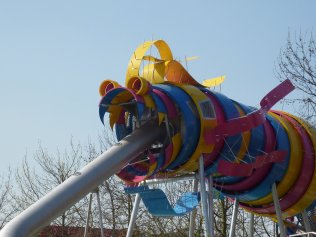 So yes, April, 8th, 2015 a new dragon of modern times came out of the ground and its reputation of being the King of games will endure in the memory of parents and children. No doubt it will find favour once again with families throughout the year.

Made out of colored metal and 25 meters in length ; it is not just a slide but a tube of eleven meters of different heights and levels and wide enough for teens coming out of the head while the smaller children slide  inside. Children are propelled out of its mouth through a closed tube so no worries for those who were afraid of falling out. Portholes allow natural light to enter through the tongue-slide. New safety standards no longer allow an open slide from a certain height.

Going up and down the big slide is recommended only for children between 8 and 14 years. Children who want to play must really be enthusiastic because they will need to climb the rope, rubber stairs, and various rope-nets to reach the head and come down  the other side.

The garden, surrounded by shady trees, can be very useful on sunny days, it is accessible to all ages with the best stability games, climbing nets, rocking-swing animals, turnstiles, etc… (pictograms shows age recommendations).

A table and stone benches are installed close to the games. A water fountain and toilets are available (outside the garden – across the cobblestone street).

Part of the garden is now accessible to children with reduced mobility, the garden slopes slightly (access opposite the marquee).

Ursula Kurz, landscape architect, has been, since the creation of Parc de la Villette, in charge of designing and monitoring the implementation of several gardens in Parc de la Vilette. She once again supervised the security standard of the Dragon 2015 to comply with all new regulations ; a saga she has been following for the last few years !

How to get to the garden of the Dragon?

The garden is located close to the Cité des Sciences and the Geode near the bridge which crosses Canal de L’Ourcq- the meeting point at Folly N° 5 at the level of the restaurant and merry-go-round.

From the metro station line 5 – Porte de Pantin – walk along the small lane beside the Grande Halle, Pavillon Paul Delouvrier,  the garden “jardin des dunes et des vents” (another area for free games ; the entrance is through the folies) and continue up  the bridge to access  the garden of the Dragon ( a lift is located at the foot of the steps before the bridge ).

From the line subway station 7 – Porte de la Villette or T3b (tramway) –bypass Cité des Sciences in the direction of Canal Saint-Denis and follow the small lane called « Galleries de la Villette ». You will arrive directly at the garden.