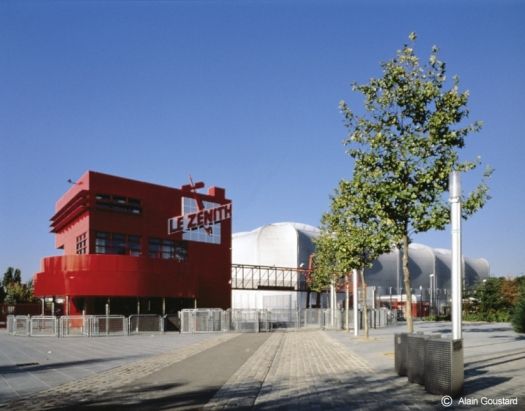 The Zénith is a concert arena located in Paris 19th arrondissement, in the Parc de la Villette. In 1981, Jack Lang, then French minister of culture, pointed out that there was no cultural venue in Paris able to accommodate large numbers of young people for rock concerts or gigs. Therefore a concert hall had to be designed for this kind of music and audience. Two architects, Philippe Chaix and Jean-Paul Morel worked on it and an idea for it took shape.

Since its inauguration in 1984, all the great names in French music have performed on the stage at the Zénith Paris; English groups make a halt too during their European tour for a couple of dates. Shows for children, sports events or business conventions attract a large and diversified public. After more than 30 years, the Zénith is always just as successful and hosts more and more events with more and more spectators.

Please note that there are no cloakrooms! Spectators must keep their personal belongings with them. Lockers are only for dangerous objects or objects confiscated by the production management team (photos cameras, video cameras, recorders, etc.) Doors open about 1h30 before the beginning of a show (time indicated on ticket)

Find a hotel, restaurant near the Zénith

Bars sell fresh drinks, coffees, sandwiches, chocolate bars, etc. around the concert hall (in the Folies - red buildings in parc de la Villette). You can also dine in restaurants in Paris close to the metro or around. Click here to find a list of hotels close to the concert venue Zenith Paris. Some appart'hôtels are located in Paris and make for a pleasant stay.

How to get to Zénith - Paris la Villette ?

The Zenith concert venue is situated in the middle of Parc de la Villette in Paris 19th district. We highly recommend taking the Paris public transport with the metro, bus or tramway – parking places are usually full and it is difficult to park close by.

Just remember to buy your tickets at RATP ticket office or machines. Print your itinerary or the RATP metro map , on the RATP website (metro, bus, tramway and RER)

Tramway T3b - Porte de Pantin station - Parc de la Villette station (walk towards the lion fountain and continue down the path between la Halle and the Philharmonie – count for about 800 meters on foot).

How to go from Gare de Lyon to Zénith Paris?

You can also take RER D from Gare de Lyon to Gare du Nord and then take metro line 5.

How to get to Zénith Paris from Gare de l’Est?

Take metro line 5 or line 7, both will take you to the nearest station to the Zénith (Porte de Pantin or Porte de la Villette).

Go from Montparnasse station to Zénith Paris by metro or RER

It is very difficult to find parking near the Zenith; but in case of absolute necessity, you can park in one of the car parks, Vinci Porte de Pantin (Cité de la Musique-Philharmonie2) or Porte de la Villette (parking Cité des Sciences).

Ticket - show at the Zenith of Paris

Other events in this place : Le Zénith - La Villette Paris