The role of Napoleon Bonaparte 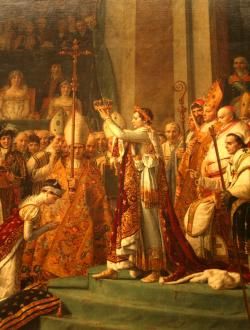 On the 24th of August in 1790, Louis XIV of France promulgates a decree which institutes the Civil Constitution of the Clergy. Among the new rules linked to this decree, the ecclesiastics such as monks cannot celebrate the service anymore. On September 14th, 1792, the members of the church of Saint-Denis celebrate their last service and the abbey becomes a parish church. Then, the following year, the royal vaults are desecrated, the kings and queens remains thrown into mass graves and the church abandonned.

Napoleon Bonaparte, who desires to transform the Church of Saint-Denis into an imperial one, is going to change the edifice destiny and will be at the origin of the old abbey restoration, starting in 1805. First, he is going to reestablish services inside the basilica. The first ceremony takes place in the new sacristy of the abbey, on the 18th of January in 1817, the day of last French Kings and Queens exhumation.

Despite Napoleon Bonaparte’s wish, Saint-Denis will never become an abbey-house and the imperial family will not be buried there. Nevertheless, he actively participates to the restoration of the abbey.

Napoleon Bonaparte gets closer to the Catholic Church

Since the Civil Constitution of the Clergy put in place by the Revolution, the religious question poisons the French society. Right after the Coup of 18 Brumaine, this question becomes priority for Bonaparte to solve. The Concordat, in agreement with the First Consul, approves catholicism as the religion of ‘majority of the Frenchs’, and not as a State religion (1801). This rapprochement between Napoleon Bonaparte and the Church is a compromise, but it is first a political calculation.

The imperial coronation is a unique event in France history. To show his power, Napoleon Bonaparte is not going to be crowned in Rome as usual. It is the Pope Pius VII who comes to the ceremony. Even if Napoleon Bonaparte decided to crown himself (because he refuses to obtain power from somebody else except him), this coronation allows him to place himself above European kings thanks to the Pope by giving a legitimate and moral dimension to the Empire.

The Empire: the choice of words, the weight of symbols

With the Empire replacing the French Republic, it faces a linguistic evolution. The word citizen, born during the Revolution, disappeared from the official language. Other words appear or reappear such as Lord or Your Imperial Majesty. The Emperor does not talk about his French People but his People.

Yet, that is not the only change. It also leads to deeper changings : new titles creating a new hierarchy, with new ceremonial suits made of silk, velvet and gold, incomes according to the title, the way of life… The Empire requires the creation of imperial coat of arms and symbolic objects, creating a pseudo-tradition. Joséphine de Beauharnais becomes Empress, Laetizia Bonaparte is now Madame Mère de l’Empereur and Napoleon’s brothers are princes of the imperial house.

Napoleon Bonaparte will try to build a imperial familial vault in the Church of Saint-Denis, a former abbey which became a parish church in 1792.

An imperial crypt for the Bonaparte family

As a symbol of monarchic power, Saint-Denis becomes the memorial of the four dynasties who reigned in France. In 1805, Napoleon Bonaparte establishes a project to create an imperial crypt for him and his descendants in the old basilica. On February 20th, he asks for the condition of the abbey and two days later, the Ministry of Interior starts the restoration: repair of the roof, paving of the floor and clearing of the crypts and vaults.

On June 22th 1807, Napoleon Bonaparte is in Tilsit where he must sign a secret treaty with Alexander I of Russia. He will learn there that his nephew and putative heir, Napoleon Charles Bonaparte, son of his brother Louis I of Holland, just died. He writes to Jean-Jacques Régis de Cambacérès, duke of Parme and archchancellor, to accelerate the restoration work of the basilica. Indeed, the Emperor wishes to place his nephew’s body there. Waiting for the new imperial vault, the body of Napoleon Charles is placed in a chapel in Notre-Dame de Paris.

In 1811, Napoleon Bonaparte makes Kings’ names, having their remains in Saint-Denis, be engraved on bronze tables but does not put the funerary monuments back to their place. Furthermore, Bonaparte thought that the decoration project for the new sacristy composed of 10 canvas dealing with the history of Saint-Denis and himself would erase the trace of the revolutionary violence by removing the memories of the Bourbons.

Napoleon Bonaparte is not buried in Saint-Denis

In Notre-Dame de Paris, Napoleon-Charles’ body is still waiting for his transfer to Saint-Denis. Yet, with the arrival of the Bourbons and Louis XVIII of France (during the first Restoration of 1814 – 1815), they decide to bring back the royal remains to the basilica. Napoleon-Charles now rests in the Saint-leu-la-Forêt Church. 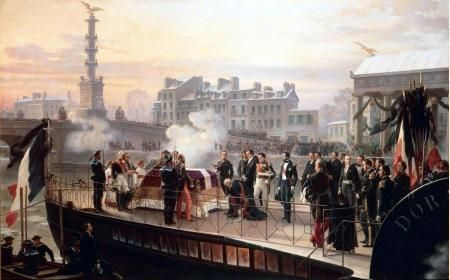 Napoleon Bonaparte will not be buried in Saint-Denis. Exiled on the isle of Sainte-Hélène after his second abdication, Napoleon wishes in his will to be buried next to the Seine, among the French people that he so much loved. His crypt is located at the Dôme des Invalides in Paris.