This simple formula allows you to see what you want the way you want. A free brochure in French, English, German, Spanish, Italian, Portuguese, Russian and Japanese is available at the door. It outlines the history of the monument and the location of the tombs. There are also numerous information panels throughout the monument.

The public may also view a permanent exhibition on the basilica’s history that includes a large model showing the Saint-Denis abbey and market town around 1600, a reconstruction of the former arcature of the medieval cloister and an audiovisual presentation on the archaeological discoveries made at the monument (Spanish and English subtitles). 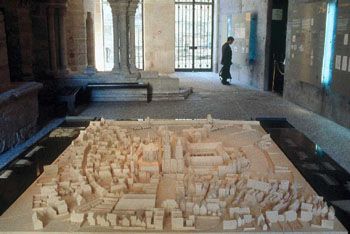 90-minute tours in French, every day at 10.30 a.m. and 3 p.m. Sundays also at 12.15 p.m. Tours may be offered at other times as well, as required. Tours in English and Spanish may also be offered on site. Reservations are advised.

Audioguides are available at the ticket office. Languages offered: French, English, German, Spanish and Italian. An original way to tour the monument on your own (length: about 75 minutes).

You can visit the Basilica during a 360° tour.