From Denis of Paris to Denys the areopagite 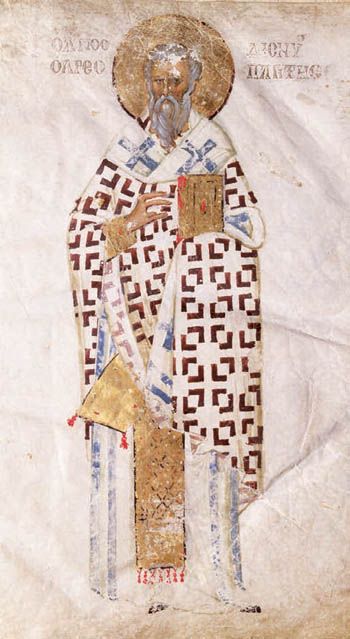 Wasn’t the bishop of Paris a biblical figure ? Confusion with Denys the Areopagite, converted by saint Paul in Athens, provides a link between East and West.

Confusion of the two denis

Towards the end of the 7th century, the second Passion of Denis introduced something new into the legend that was to make history : according to an anonymous author, Denis of Paris was no other than the famous Denys converted by saint Paul at Aeropagus in Athens, according to the Acts of the Apostles (17,34). A biblical account explains how Paul, in Athens, was taken to the supreme court, known as Areopagus, by philosophers curious to learn more about his preaching. Paul explained that the shrine that they devoted to the « unknown God » (fig.1) concerned the God of Christians but he was met with scepticism by most of them. Only a few converted, including Denys the Areopagite and his wife Damaris. In order to incorporate this new information, the author of the Passion specified that Denys the Athenian, after his conversion and baptism by saint Paul, began to preach in all places and when, once in Rome, saint Clément, disciple of saint Peter, made him bishop and sent him to Gaule at the end of the 1st century. The rest of the story remained unchanged.

Spreading of the legend did confer upon Denis the legacy of a double apostolicity : to the teachings of Peter the apostle passed on by Clément in Rome was added the sermon given by Paul the apostle in Athens. With his Athenian baptism and Roman episcopal consecration, Denis/Denys became a sort of go-between between the Greek world and the latin one, between Eastern and Western Christianity (fig.2). With interests close to Frankish royalty, the abbey of Saint-Denis thought it better to promote worship of a saint that could be a symbol of conciliation between Roman and Byzantine traditions. King Dagobert initiated the hymn of constant praise in Saint-Denis, the laus perennis, of Eastern origin, and the chorus of Monks chanting vigils night and day without interruption. Furthermore, Denys the Areopagite was already worshipped in the East as first bishop of Athens (fig.3, au centre).

Other Denys the Areopagite ? 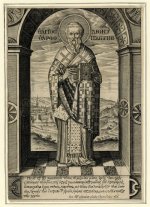 As soon as the abbey of Saint-Denis introduced this confusion, a Greek philosophical corpora of texts attributed to Denys the Areopagite circulated throughout the academic world. Today, this work recognised under the name of the Pseudo-Denys is attributed to a neoplatonic philospoher from the end of the 5th century but it had long been considered as the authentic work of Aeropagite. Moreover, from the 6th century on, an astronomic treaty and a fictive autobiography written up in Syriac Language were also attributed to Denys the Areopagite. In these texts, the author recounts how he was witness to an earthquake and an eclipse of the Sun (fig.4) at the axact moment of the death of Christ… 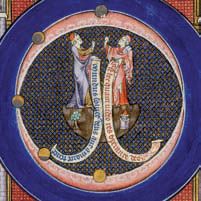 <<  Between Paris and Saint-Denis  |  Denis, astronomer and philosopher  >>