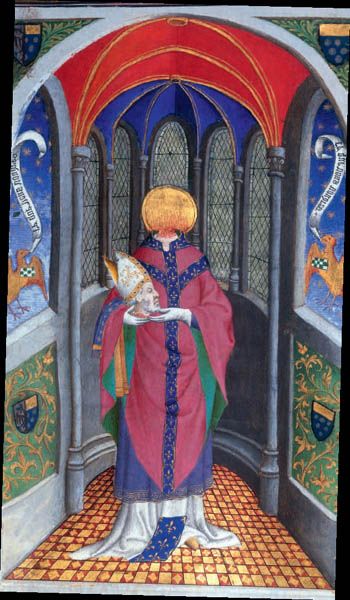 Saint Denis was first a local saint before becoming a royal one, but the trend became reversed throughout the centuries.

Denis, a local saint who became patron saint to the king

Originally, worship of the first bishop of Paris met with early expansion for many rich Gallo-Romans from the region were buried close to his relics. Merovingian kings, in turn, nurtured the cult of saint Denis to strengthen their legitimacy alongside the local population that worshipped him. That is how Arégonde, widow of king Clotaire I, son of Clovis, chose to be buried in the basilica of Saint Denis towards 580. Later, king Dagobert had it renovated and bestowed upon it immense volumes. He made saint Denis his private patron and was the first king to be buried in the basilica in 639. In an account of his life, written in the 9th century, there is reference to the miracle of « Dagobert’s dream » : while the young disobedient king took refuge in Saint-Denis to escape the wrath of his father, he fell asleep and saw in his dream, Denis, Rustique and Éleuthère in the form of three resplendent men. This vision was to be at the origin of his particular devotion to saint Denis (fig.1). A liturgical manuscript of Saint-Germain-des-Prés from the 11th century recalls his devotion by presenting him prostrated at the feet of the saint seated majestically in his church, and who blesses him in return. It concerns one of the most ancient conserved images of saint Denis (fig.2 in centre). From patron to Dagobert, Denis quickly became patron to kings. And by extension, he also became protector of the kingdom. (Fig.5).

Denis continued to raise fervour amongst worshippers as was demonstrated by miracles made. Certainly, many were related to royalty, such as Dagobert’s dream, but popular worship of Denis could be seen in successive constructions of the basilica, in the 8th century and then in the 12th century. In his « Mémoire sur la consécration de l'église abbatiale de Saint-Denis » - Recollection on consecration of the abbey church in Saint-Denis , Abbot Suger recounts how the old abbey of abbot Fulrad and Charlemagne had become too small to contain the vast number of Christians gathered at the tomb of the saint. The crowd was so dense on feast days that women ran up to the alter over the heads of the men. Suger’s new abbey church, completed in the 13th century, was much more spacious and fitted with an ambulatory thus controlling the influx of pilgrims. Great nobles of the kingdom continued to be buried here. (fig.3).

A protector among others

Worship of saint Denis continued even after Suger, as can be seen in the « Légende dorée » - the golden Legend by Jacques de Voragine : Denis figures highly here and the author reminds us of some of his miracles, in particular his most famous one, communion received in Prison by the hand of Christ (fig.4). However, Denis was not the only patron saint to the inhabitants of Ile de-France – Paris region. After 1297, they could also rely on saint Louis, buried in Saint-Denis. « Les miracles de saint Louis » - the miracles of saint Louis by Guillaume de Saint-Pathus tells of the many healings that occured at his tomb. But the Paris population also showed reverence for the prayers of sainte Geneviève, she who saved the town from Attila. From the 16th century on, popular worship of Denis went on the decline while devotion towards sainte Geneviève flourished, even up to the 18th century.

Figure 1 :
Miracle of Dagobert asleep in the oratory on which the church of Saint-Denis was built.
Great chronicles of France illustrated by Jean Fouquet (towards 1455-1460)
Ms. Paris, Bibl. Nat. fr. 6465, fol. 57

Figure 3 :
Illustration of the tomb of brother Guillaume Dazanier,
provost of Tremblay and butler of Saint-Denis.
Paris, Bibl.Nat., coll. Gaignières 4723

<<  Other cephalophore saints  |  Protector of the kingdom of France  >>