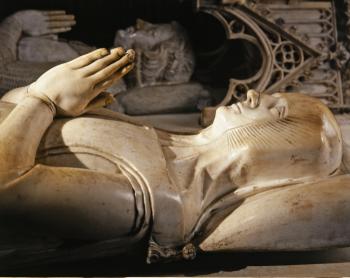 Margaret of Flanders was one of the benefactors of Saint-Denis. After the death of Louis II at the battle of Crécy in 1346, she bestowed her largesse on Saint-Denis.

The chapel overlooking her recumbent statue was placed above the alter reliquaries of the holy relics. This construction in superbly decorated stone and wood, is an illustration of opulence and prosperity no longer visible on certain tombstones.

At the feet of the deceased rest two dogs with a bone between their paws to indicate that her body lies under the recumbent statue.