From the 12th century, animal statues were placed at the feet of the recumbent statues. They were the protector of the deceased in the afterlife. Some even considered that they were placed there to prevent the deceased from coming back thus protecting the living. This tradition came from the statues tailored on the portals of churches on which the characters were associated with the representation of a real or mythical animal that represented a quality or a vice. These symbols, examples of which you can find in the Basilica of Saint-Denis, might bear different meanings.

The dog, female symbol and guardian

The dog is often found at the feet of the recumbent statues of women, sometimes children (Louis de France, son of Saint Louis who died at 17 years old). It symbolizes loyalty to the soverain and to the kingdom but especially of faith. The dog is also guide in the kingdom of the dead. When it has a bone between its paws, it is a sign that the body is under the effigy such as the statue of Margaret de Flandre.

The lion, King of animals 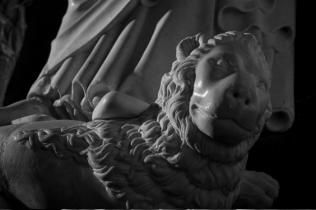 It is quite natural that the lion be associated with the king. The “king of beasts” is a symbol of strength, power and justice. We also see the evocation of the father, but also and above all, the resurrection of Christ. In the Middle Ages, it was thought that still-born lion cubs came to life again after three days thanks to the breath of the mother. The lion is always lying at the feet of the statues of men, with the exception of the recumbent statue of the unidentified Princess visible in the necropolis in Saint-Denis. There are several lions in Saint-Denis at the foot of recumbent statues, John, son of Saint-Louis, Philip III the bold, or Charles, Count of Étampes.

The dragon, mythical and evil

The dragon is associated with evil. Placed at the foot of recumbent statues, it recalls those often placed at the feet of Mary, symbol of victory against evil. The statue attributed to Marie de Brienne in Saint-Denis is an example. Indeed, this recumbent statue can be identified thanks to this visual symbol.

The porcupine: "If you go looking for trouble, you’ll find it"

The porcupines evokes the Order of the Porcupine founded by Louis of Orleans on the day of his son Charles’ baptism. The porcupine is the symbol of the Valois-Orleans branch. Louis de France was said to have taken this warrior animal as an emblem to intimidate the Duke of Burgundy. The famous motto 'If you look for trouble, you will find it' was mistakenly attributed to the Duke of Orleans. The motto of the Order of the Porcupine was actually Cominus and eminus, 'From close and from far'. King Louis XII removed this order, but conserved the emblem.

The ferret, a skillful hunter

A ferret can be seen lying at the foot of Philippe of Orleans in the Basilica Of Saint-Denis. It refers to the fact that the deceased was a very good hunter. It is served here as the symbol to boast the virtue of the figure.