Tombs of the Dukes of Orleans 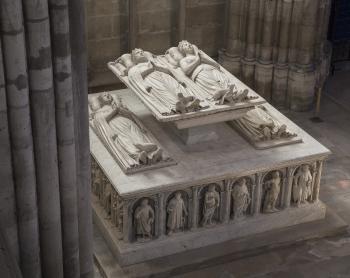 In 1502, when Louis XII returned from his victorious campaign in Italy, he ordered a Genoese artist to create a monument in the memory of Valentine Visconti, his grandmother.

This funerary artwork had been the link between medieval recumbent effigies and the new representation of the ancient Italians tombs of the Renaissance era. It recalls the family origins of Louis XII and shows the infatuation of that era for Italy. It highlights notable developments of funerary art: the eyes are closed and the lying effigies begin to look similar to their original models.

The cadaver tombs realistically represent the agony of the dead while the praying figures situated at the base are the heavenly representation of the dead awaiting resurrection.

The base of the monument reworked by Viollet-le-Duc is made of shell alcoves filled with sculptures of apostles, evangelists and saints such as Saint Geneviève or Saint Sebastian. Produced for the church “l’église des Célestins” which was destroyed in 1795, the tombs of the Dukes of Orleans were brought to Saint-Denis after 1817.

Louis is represented with closed eyes with his head resting on two pillows. The lion placed at his feet symbolizes strength and is also the theme that appears in the renaissance, the hope of resurrection. It was said at the time that a lion cub born still-born was brought back to life after three days by his mother’s breath. This idea also evokes the resurrection of Christ three days after his death.

The deceased is represented with her eyes closed. A dog lying at her feet, symbol of fidelity even in death and her guide in the kingdom of the dead.

Philippe of Orleans, Count of Virtues, son of Louis d’Orléans and Valentine de Visconti. A ferret sculpted at the foot of the effigy recalls that the count was a great hunter.

Charles was made prisoner by the English for 25 years after the battle of Azincourt. Coming back to France, he moved to Blois where he wrote a nostalgic verbose and his work was marked by the misfortunes in his childhood. At his feet, a porcupine evokes the facts that his father Louis founded the order of porcupine on the day of his baptism.