The organ of the cathedral-basilica of Saint-Denis 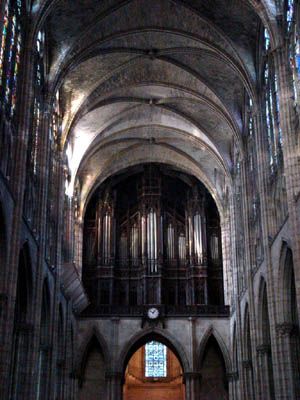 The earliest mention of an organ in the basilica was in 1506. In 1604 it was replaced by a new instrument built by Jean Carlier de Laon. Between 1690 and 1700, a third and larger organ was constructed. Its case was perhaps the work of Robert de Cotte (1656-1735), the architect responsible for the royal chapel at Versailles and for the rebuilding at the same time of the abbey in Saint-Denis.
During the Revolution, it was dismantled and kept at what was to become the Conservatoire des Arts et Métiers founded by Abbé Grégoire. Unfortunately it disappeared and was never recovered. .
In 1806, when Napoleon was taking the decision to restore the Basilica, it was planned to rebuild an organ. In 1836, the Basilica’s chief architect, François Debret (1777-1850) designed the present-day organ case, which was then built by the master carpenter André Bouxin with carvings by Blois and Brun.

The loveliest of classical French organs

The organ, of considerable size, consists of a very high central tower and two square turrets topped by pinnacles the galleries and gables of which bear statues of angelic musicians.
Adolphe Thiers appointed a committee to choose the organ-builder. The young Aristide Cavaillé-Coll (1811-1899) was appointed. It was a family affair (his father and his brother joined him in the task) to work on the building of an exceptionally fine instrument.
Gigantic in its dimensions and with an impressive number of possibilities of mixes and sets of reeds, the organ was to be recognised as the finest of classical French organs in the purest tradition of those built by the Thierrys and the Cliquots. .But to the organ-builder’s art, still at the time influenced by the Baroque style, it added a new aesthetic appeal that was the forerunner of the great symphonic organs that were to come.

The Cavaillé-Coll family set up a place of work in Paris, but more particularly a workshop at the base of the Basilica towers where the essential work on the organ was carried out. The master carpenter André Bouxin and the organ-builder Antoine Sauvage built the fourteen windchests and the pipes of wood. In a report on the progress of the work dated 29 March 1937, Aristide Cavaillé-Coll stated that the organ had 5 keyboards and that 1394 of the 5206 pipes remained to be fitted before the fitting of the organ case and its front pipes.

Three years after the order for the building of the organ, the instrument was still not ready because the assembling of the mechanical parts and the transmission to the multi-valved windchests of the notes produced were not considered satisfactory. It was at that time that Charles Spackmann Baker (1804-1879), an English organ-builder, came to the rescue with his invention of the pneumatic lever, at the time not yet patented, which was to be used for the first time in Saint-Denis. The official opening ceremony took place on 21 September 1841, and marked the rise to fame of Aristide Cavaillé-Coll. In 1857, Aristide Cavaillé-Coll made slight alterations to the composition of the organ and the bellows were fitted with footpumps.

In 1901, restoration work on the organ was performed by Charles Mutin, who increased slightly the number of stops to 69. Restoration work was carried out between 1983 and 1987, by the Danion-Dargassies company (on the mechanical parts) and by Boisseau-Cattiaux (the harmony and the tuning). The stops added by Charles Mutin were removed and the C pedal retained. Preserved almost totally in its original condition, the organ in the Basilica of Saint-Denis is without doubt one of the finest in France. Pierre Pincemaille has been resident organist in the Cathedral-Basilica since 1987.