Between Jacques Legrand's death and the arrival of Eugène Viollet-le-Duc, three architects succeeded one another on the building site of the Basilica of Saint-Denis. Jacques Cellérier, just after Legrand, worked there for six years. François Debret then succeeded him and worked for 23 years but had to resign because of the critics… 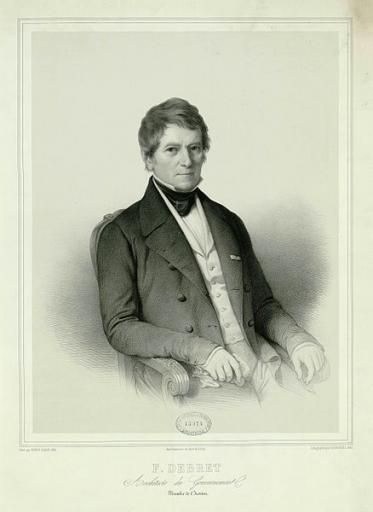 After Jacques Legrand’s death in 1807, Jacques Cellérier (1742 – 1814) takes over the job. He will head the restoration work at the Basilica of Saint-Denis until 1813. Despite his preference for neo-classicism art, Cellérier reuses the gothic style of Saint-Denis to build the new chapel along the collateral aisle. He had already worked on gothic style during the Saint-Médard Church restoration in Tremblay-en-France, where he realized a front nave to find a solution to the dilapidated bell and the nave of the church.

In 1808, Jacques Cellérier has a first series of incrusted pillars installed. Progressively, the entire floor of the structure is raised about five steps higher. The sanctuary and the choir are tiled with different colors of marble. Cellérier starts the construction of a new chapel and turns it into a choir for the canons on the southern side of the nave. He will not have the time to finish it because of his sickness. This small neoclassical structure leans on the medieval masonry of the basilica which unsettles it and François Debret will need to find a solution to this problem.

François Debret had the architect Charles Percier (1764 – 1838) as a teacher who was one of the first during the Revolution to make sketches and plans of the Basilica of Saint-Denis. Debret will make the best use of them.

Chosen by Napoleon Bonaparte, Debret will also work during the Bourbon Restoration (1814 – 1830) and the July Monarchy (1830 – 1848). He decides to start the restoration of a major monument whereas technics and structures of medevial constructions are still unfamiliar.

Following his arrival, François Debret first takes care of the new chapel of the chapter, also know as the « chœur d’hiver des chanoines » (the canons’ choir), and the reconstruction of the Bourbons’ vaults. He also restores the facades, the tower, the rose of the transept and the inside decoration of the basilica.

During the Restoration, a necropolis becomes part of the abbey as Napoleon Bonaparte wished it. In compliance with a decision made under the First French Empire, some of the funeral sculptures from the Monuments Français museum, managed by Alexandre Lenoir, are brought back to Saint-Denis in 1817. Debret and Lenoir take the initiative to settle the recumbent effigies in the crypt and not in the higher church as they were supposed to be first. Planning to open the crypt to the public, the two men decide to place the effigies in the right order, paying attention to the chronology.

In 1833, the first critics concerning Debret’s work come from Edmond Blanc, Master of Requests of the Council of State and secretary-general of the Ministry of Commerce. He shares his opposition to the chapels decoration project which, according to him, is not enough elaborated and disagrees with the style of the monument. He even makes the work stop. Debret, who has all the autorisations required, firmly protests. Edmond Blanc calls on his friend and colleague, Ludovic Vitet, General Inspector of Historical Sites. Yet, Vitet appreciates the culture and goals of Debret but reproaches him for not being accurate on some details and also for using oil paints (shiny) like in the Midle Age and not glue-bound distemper (mat) that is now used. Vitet considers that decoration works must be suspended in favor of the building work to finish. At the end, this case will be forgotten during eight years.

On June, 14th 1841, the Commission des Monuments Historiques (Committee of Historical Sites) gathers to talk about the work in Saint-Denis. None of the members had shown restrain about Debret’s work, at least in writing. Jean Vatout who heads the committee reproaches Debret for treating the Basilica of Saint-Denis like "a simple village church". Debret is asked to leave the room. The committee decides to place Debret under administrative supervision without divulging the case fearing the loss of money contribution from the state.

The Académie des Beaux-Arts, including Debret as a member, decides to create a committee to have a second opinion. The Beaux-Arts concludes that the accusations against François Debret are irrevelant and the public work administration rehabilitates the architect. Yet, people still critic his work, especially in newspapers talking about an ‘inflicted’ restoration of the basilica, opposing the new archeologic school to the old one. Furthermore, when Debret decides to replace the old wooden roof by one made of iron and copper, he causes the rage of the new archeologic school firmly against the use of any modern technics to restore ancient monuments.

The list of all his work made in February 1842 is quite remarkable: restoration of the principal facade including the front steps and platform between the two towers, the northern and nouthern towers, the terrace on the southern side aisle, the rose windows and the first three vaults in the nave. He also made other transformations in the nave and the crypt…

According to the estimate, there is still the large nave door to be built, as well as the stained-glass windows of the choir, the settling of the side aisle chapels, and to finish the sanctuary chapel and the Saint-louis chapel. François Debret will not be able to finish his work. He will resign during the summer of 1846, after finishing the reassembly of the spare, because of all the critics from Prosper Mérimée and Eugène Viollet-le-Duc against him.

From Félix Duban to Eugène Viollet-le-Duc

When Debret left, the archeologist Adolphe-Napoléon Didron thinks that it will be very complicated to finish the restoration of the Basilica of Saint-Denis. He writes that "the one who would dare undertake such a task would only fail". But he is wrong! Debret recommends his brother-in-law and student Félix Duban who participated to the restoration of the Sainte-Chapelle. His mission will require much more work: the maintenance of the monument, the achievement of the iron and copper roof and the problem of the northern tower.

Félix Duban hesitates. After considering the situation, it appears to him that success is "impossible, or very hard to get". Finally, he accepts. Yet, he resigns just after his official nomination on July, 15th 1846.

Three months after Duban resignation, the administration names Eugène Viollet-le-Dur as architect of the basilica.