St Denis, protector of the kingdom of France 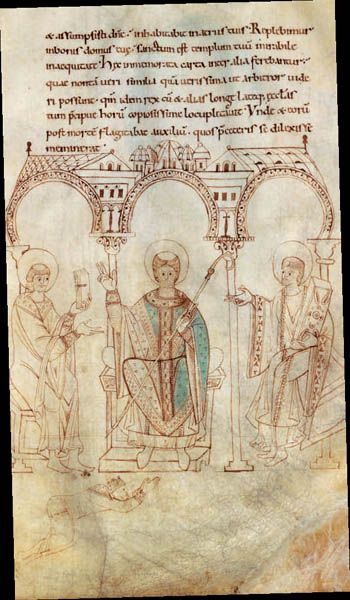 The cult of saint Denis.

Denis was certainly private patron to the kings of France and it was he who was called upon, for example, when the king was unwell. In a Compilation in honour of saint Denis completed at the end of the 15th century, it is possible to observe the saint interceding alongside the Virgin Mary and baby Jesus in favour of king Charles VIII (fig.6). But the saint was also protector of the kingdom. This collective protection was embodied in the banner that the king held up high from the 12th century when he went into battle to defend the kingdom. As can be seen in this copy of a stained-glass window from Chartres cathedral (fig.7), the saint is handing his scarlet red banner over to Henri de Metz, marshal of France and probably the banner-holder of the king in the 13th century. Legend suggests that this banner was the one that Pope Leo III offered to Charlemagne who then took it to Jérusalem ! The banner was brought out for the last time during the battle of Azincourt in 1415, during which it got mislaid or lost, but the kings did not lose the faith in Denis’ effective protection of them…

Devotion of the princes of blood

The princes of blood shared the king’s devotion for Denis, which was characterised by the many pious foundations or donations of relics to the abbey. The alterpiece of saint Denis (fig.8), commissioned by the duke of Bourgogne, is yet another expression. The Christ on the cross here interprets the mystery of transsubstantiation, or the transformation of bread and wine during mass, that occured during the miracle of the communion that Denis received from the hands of Christ, aided by a kneeling angel wearing a deacon stole in front of which we can see a chalice. To the right we can see the martyrdom of the saint and companions : Rustique has already been beheaded while Éleuthère, in deacon garb, awaits his turn ; Denis, his head on the block with his neck already sectioned, awaits the finishing blow. This alterpiece is a good reflection of piety and suffering from the end of the Middle Ages ; the blood of Christ flows abundantly, as it is through this blood that humanity can be saved.

Devotion of the servants of the State

Devotion to Denis was also nutured by the servants of the king in his administration, as can be seen in the alterpiece of the Paris Parliament, completed towards 1450 for Dreux Budé, court usher and guardian of the charters of the king (fig.9). it was intended to grace the walls of the larger chamber of the Parliament where justice was carried out in the name of the king. The detail given here shows saint Denis, walking through Montmartre with his head in his hands, and saint Charlemagne, dressed like a Byzantine emperor. This eminently political composition strove to point out the divine origin of royal justice, placed under the patronage of saint Denis. The severity of this justice is symbolised by the bloody sword in the hand of Charlemagne, and its Parisian entry is also evoked, in the background, by a representation of the « Palais de la Cité ».

Figure 6
Charles VIII on his knees and designated to the Virgin Mary by saint Denis.
Compilation in honour of saint Denis illustrated by Master
Jacques de Besançon (towards 1495-1496)
Ms.Paris, Bibl. Nat. fr. 5868, fol. 1