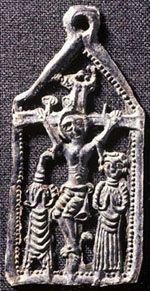 Benefitting from royal patronage, the Carolingian abbey was witness to many distinguished guests ; archaeological material, often of quality, is proof of the presence of this social elite : elegance of ceramics and decorated coloured glass. An important pilgrimage centre, Saint-Denis welcomed many pilgrims during the Middle Ages ; some of their medals were found during excavation. These small objects of piety, mass produced in tin/lead alloy, were produced as proof of their presence at holy places such as Saint-Jacques de Compostelle, Saint-Servais de Maastricht ou Notre-Dame de Boulogne.

Economic activity in the monastic village was boosted each year by three markets : Saint-Mathias (February), Lendit (June) and Saint-Denis (October), the latter reaching back to the Merovingian era. 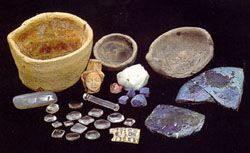 On the blending of written sources and archaeological data, active artisan activity emerged that both generated and regulated the abbey. It was directly involved in the running of the royal abbey, as demonstrated by the presence of a monetary workshop that minted the coins in the name of Pépin (751-768). Maintenance of glass windows in the Carolingian basilica was secured by glassmakers as can be seen by the leaded stained glass molds uncovered. At the end of the Middle Ages, a goldsmith enameller restored the works of this famous treasure.