Charles, Count of Valois (1270 – 1325), son of Philip III of France and Isabella of Aragon. Son of a King, and uncle of three Kings, he will never access to the throne. His recumbent effigy represents him as a knight with his hauberk and a tabard bordered with epitoge.

During the Revolution, the recumbant effigy’s legs were broken. The left leg was found among the remains of the Church of the Jacobins where he was buried. 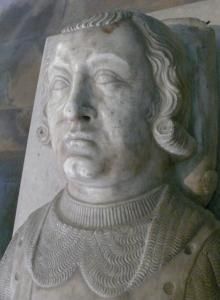 Effigy of Charles, Count of valois

His son Charles, Count of Alençon is also buried in the Basilica.