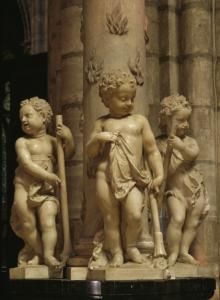 The funerary monument of Francis II of France consists of a column decorated with flaming tongues of fire which evoke those that guided the Hebrews in the desert and came down on the Apostles filling them with the Holy spirit. At its base, three genies hold torches upside down, a symbol of death.

The ensemble, originally from the Célestine church in Paris, holds a vase containing the king’s heart.