Born after the death of his father Louis X the Stubborn, Jean I lived for five days. The child-king is not reprensented with the royal garment but with a surcoat with three bands of ermine on the shoulder, and bore, initially, a crown. A lion, symbol of royalty and resurrection lies at his feet. This white marble effigy, placed at the feet of his father, is disproportionate. 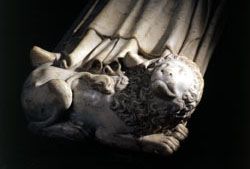 Detail of the recumbent effigy of Jean I the Posthumous.
© Pascal Lemaître - National monuments Centre