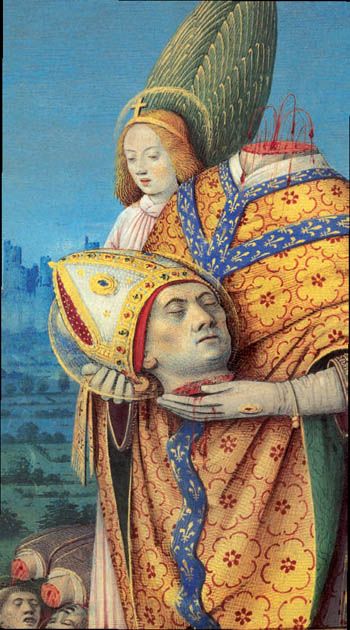 The history of Denis carrying his head met with great success. Many other saints followed his example.

To date, specialists have identified more than one hundred and twenty cephalophore saints. Their stories, one more different from the other, were made known by texts written in the Middle Ages and in modern times. In most cases, it concerned decapitated saints, head in hand, who, through speech or miraculous gait, declared their desire to be buried in a particular place. The most famous ones were worshipped in the north of France and were sometimes represented explicitly as disciples of saint Denis. It was the case, for example, of saints Fuscien and Victoric, beheaded not far from Amiens and worshipped even today in the cathedral of Amiens, but also of saint Lucien de Beauvais (fig.8), or of saint Just, worshipped in Saint-Just-en-Chaussée in le Beauvaisis.

In iconography, saint Denis is sometimes confused with other cephalophore saints, such as Nicaise de Reims or saint Euchaire (fig.9), an itinerant bishop buried in Liverdun, who, like him, carry the crosier (the shepherd’s stick) and the mitre (triangular hat) because they were bishops. While many cephalophores are represented as religious leaders, former legends tell the story of lay people who, after losing their heads in different circumstances, carried their heads in their hands. It was the case for saint Livier, a noble and valiant warrior from Metz, who was venerated for having defended his town against the Huns of Attila in 451 before being decapitated by them. He is recognised by his armour, as can be seen in this etching by Jacques Callot (fig.10). As for saint Trémeur, worshipped in Britany, legend represents him as being the young son of sainte Triphine, assassinated in Carhaix by his father-in-law, Count Conmore, in the 6th century. In the iconography, he is represented as a martyred cephalophore child, a handsome young man with long hair (fig. 11).

Regarding cephalophory, women saints are just as concerned ! Among the most famous can be mentioned sainte Noyale, presented as the daughter of a king of England who apparently sought refuge in Brittany to avoid an arranged marriage. Decapitated in Beignan by a local lord, she made her way to Pontivy with her head in her hands (fig.12). In the Limousin, sainte Valérie, martyrised after having converted to christianity by saint Martial, first bishop of Limoges, was said to have carried her head to place it on the altar where saint Martial was celebrating mass (fig.13). As for sainte Solange, her very legendary story tells of a pretty shepherdess assassinated near Bourges by the son of a Count for refusing his advances and wanting to keep her virginity. She was said to have carried her head to the church Saint-Martin.