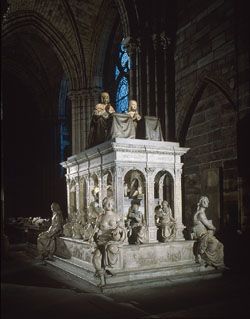 The three two-level tombs of Louis XII, Francis I and Catherine de’ Medici are based on the same model. On the lower level, there are the transis, lifeless naked bodies sometimes depicted in a macabre fashion. Above, the serene souls pray to be lifted up unto God.

The invention of two-level Renaissance-style monuments probably sprung from funeral ceremonies. From the time of Charles VI to that of Henry IV of France, when the king died, a funerary effigy of him was created. It had a wax face and was served solemn meals several times a day. Lying in state, the effigy represented the permanence of the monarchy. The day of the burial, the coffin was placed inside a catafalque, and the effigy, on the upper platform. The tomb of Louis XII and Anne de Bretagne conveys in marble the ephemeral funeral structures. The tomb of Francis I celebrates the knightly king who emerged victorious at Marignan in 1515. On that of Henry II and Catherine de’ Medici, the emphasis is on religious and Catholic themes. 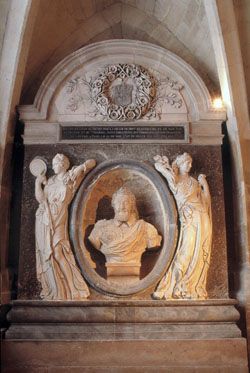 Whereas the bodies of medieval and Renaissance sovereigns were buried directly beneath the sculpted monuments, the Bourbons, starting with Henry IV of France, were laid to rest in the central part of the crypt, where the burial vault of the Bourbons was located. All these sovereigns were laid in plain lead coffins encased in wood.