St Denis in the modern world 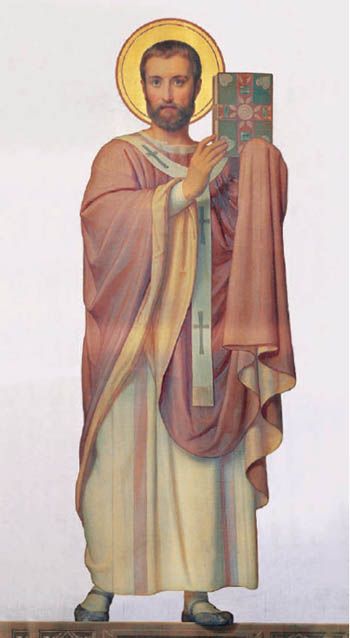 saint Denis is not your ordinary saint. His extraordinary legend and royal worship continue to make an impact.

From illumination to the printed image

Thanks to the invention of xylography and lithography, the techniques used to reproduce a large number of prints at any one time, the images of saints that embellished the old books of hours (a kind of religious calendar), reserved for the elite of society, were then made accessible to all. Until the middle of the 20th century, devotional images were profoundly popular among worshippers. Generally coupled with a prayer, they allowed the public to become familiar with the saints thus making them more accessible. In the town of Epinal, a factory owned by Jean-Charles Pellerin, founded towards 1810, specialised in the reproduction of coloured images, secular or religious. So successful was this production that the name Epinal passed into common language to designate a popular image, oversimplified. Just like many other saints, Denis was also subject to an « image of Epinal » which presented him as the cephalophore bishop saint, eyes closed, his face marked by the suffering signs of martyrdom (fig.6).

A saint Denis made young

Along with popular devotion, saint Denis remains a political saint who features in French national heritage. It is not surprising that he has found place in the chapel of the Elysée Palace ! Artists from the 19th century offer a rejuvenated image which contrasts totally with previous representations, as can be seen from the works of the famous Jean Auguste Dominique Ingres for the chapel Saint-Louis de Dreux (fig.7, in the centre) and of Sébastien-Melchior Cornu for the Élysée (fig.8, in the centre) : in both cases, a young man, dynamic, head bare, bearded, plainly dressed, seems to reach out to convert the spectator. Denis appears here, neither as the cephalophore martyr, nor as the bishop of Paris, but more like the evangelizer of Gaule. Clearly, the artists tried to conjure up a Denis shed of his legends and more conform to the historical reality of the time of the first Christians.

A source of inspiration for modern artists

Today, saint Denis remains the symbol of the town that carries his name. The New Year cards offered by the town hall of Saint-Denis are regularly drawn by modern artists. Among them, Loustal, born in 1956, and Robert Combas, born in 1957, chose to represent the cephalophore saint (fig.9 et 10). In both cases, we notice that the saint is represented in a traditional manner allowing us to identify him immediately. In a more allusive and symbolic way, a Brazilian artist, Vanessa Rosa, recently adopted the theme of cephalophory (fig.11) to represent students in thought on the walls of the University Paris 8 in Saint-Denis : enough to lose one’s head ? The iconography of saint Denis has already got a long story behind it and it is surely not finished yet…