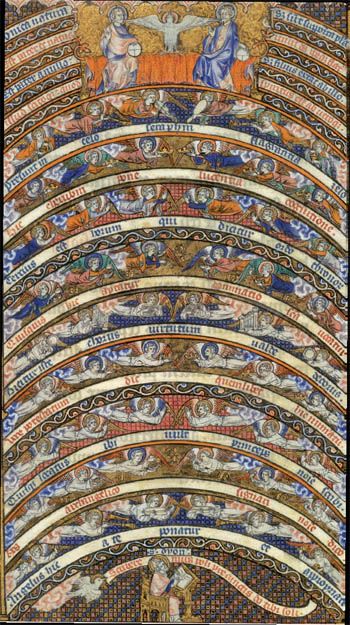 A new image of saint Denis, a synthesis of earlier traditions, was elevated in the context of the Carolingian Renaissance.

Under the reign of Louis the Pious, in 835, abbot Hilduin of Saint-Denis wrote up a new version of the Passion of his patron saint. To do this, he took on the role of historian and undertook a critical examination of all texts available in order to conciliate all traditions from the East and West. In his opinion, identity of the two Denis leaves no doubt : « his » Denis is of course Areopagite, astronomer and philosopher, author of many academic works (fig.6). the elevation of devotion of this Doctor of the Church is perfectly in line with the intellectual and cultural revival orchestrated by Charlemagne and his successors. For Hilduin, Denis was baptised by saint Paul (fig. 7) and made bishop of Athens. As it was not lawful to receive the episcopal consecration two times, it was not an episcopate but an « apostolate », a mission comparable to the apostles, that Clément de Rome conferred upon him. At the same time, Denis lost his status as « first bishop of Paris » to be replaced by « apostle of all Gaule ». Henceforth, the royal abbey of Saint-Denis was no longer accountable to the bishops of Paris.

Hilduin also set out to translate the philosophical works of the Pseudo-Denys from Greek to Latin. Much was at stake as these treaties focused on christianising Platonic philosophy. The author endorsed a state of mystic contemplation, to allow man to get close to divine mysteries. In a book entitled « La hiérarchie céleste » - A heavenly hierarchy, the philosopher describes in great detail the hierarchy of the nine choirs of angels and their respective functions. The illumination presented here (fig. 8, au centre) shows Denys in the posture of a scribe observing the heavens : from bottom to top there is a successive representation of angels, archangels, principalities, powers, virtues, authorities, thrones, Cherubims and Seraphims topped by a figure from the heavenly trinity.

The importance of Dionysian theories

The astronomy practiced by Aeropagite before his conversion led him to develop an original view of Christianity (Fig.9). As the sun lights up everything around it, the spiritual light of God pours out over nature, active energies, intelligent beings making them what they are. This divine illumination expands to varying degrees, leading to a hierarchy that defines both the place that each entity holds and the function given to it from above to transmit below. The doctrine of the Pseudo-Denys was to have an enduring fascination on the thought of the Middle Ages. A subject of countless observations, these works were to remain a subject of meditation for Maximus the Confesseur, Jean Scot Érigène, Hugues de Saint-Victor, Albert the Great, Thomas d’Aquin and many more. The mystic illumination of the Pseudo-Denys is also without a doubt at the origin of the importance given to light in gothic art by abbot Suger (1122-1151), builder of the basilica as we know it.

Others articles about St Denis:

- St Denis, protector of the kingdom of France