Evolution of Queen and Princess in Saint-Denis 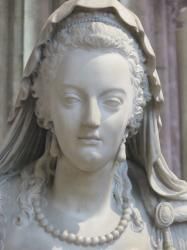 Queens and princesses, although in the shadow of the kings, were witness to, and took part in, the tumultuous history of the French monarchy mainly recorded in the Cathedral of Saint Denis. These women were often relegated to the stereotype role of representation and reproduction. Yet, some managed, in spite of the political and social context of that era, to personally mark and define the history of France. Women of power, mother-queens, substitutes or policy-makers succeeded each other in Saint-Denis. Some of them are well known, while others are the confidential royal secret, but all of them had their say in our historical heritage.

To be a Queen: a role that evolved from Middle-Ages to Renaissance

In the Middle-Ages, the Queens could have, depending on the context, major powers and even be true clan leaders. Indeed, if the king was unable to govern, by reason of physical or mental health, most of the time, the queen could be required to take part in the realm of politics. Some of the French queens such as Eleanor of Aquitaine even went on crusades. In the eyes of the highest ecclesiastical authorities of the church this was a scandal: women were considered by them to have tarnished the values of the armies and caused the downfall of the crusades. Married to two kings, and mother of twelve children including two sovereigns, Eleanor of Aquitaine reigned for sixty seven years, she worked with influential churchmen such as Abbot Suger or Thomas Becket; she highlighted the status and the freedom of high society women in the Middle Ages. A skillful rigorous spirit with strength of character, sought the annulment of her marriage and chose a second husband, an exceptionally rare event at that time! Eleanor of Aquitaine was present during the consecration of St Denis abbatial church on June 11th, 1144. Eleanor's vase was found among other treasures in the Basilica of St Denis. You can contemplate Eleanor's vase at the Louvre museum.

Gradually, the role and power of the queens were reduced to their function of representation in the Renaissance era, with the notable exception of Catherine de' Medici. The more the status of queen became official, particularly with the coronation of the queen in Saint Denis, the more her scope of power diminished.

The queen had a sacred role of representation and not just of procreation. She represented traditional values. The frivolous and spendthrift nature of Marie-Antoinette (and all queens in general) buried in Saint Denis, was rebellious and in fact at odds with traditions. She thus drew the wrath of the population and precipitated the disavowal of the monarchy. But the real reasons for this fierce hatred it aroused, was more about her breaking with the traditional image of a queen than that of any political influence.

Queen and woman, sinful by nature

The image of the queen, and woman, looming through the heritage of Saint Denis is too complicated and ambiguous to define. The written testimonials of that era were produced by churchmen. Hostile to women, whom they considered as sinful by nature, they generally crudely painted a disturbing and unflattering picture. Therefore we cannot solely rely on their testimony to represent a realistic image of the role of women in the monarchy and the effectiveness of the exercise of their power. Some queen figures stand out for the negative image that sticks to them.

Fredegunda had a very bad reputation because she is said to have set up the murder of her enemies to govern, it was an extremely common practice among men at that time… She cunningly plotted the murder – common practice at that time - to come to power by becoming a queen and to acquire a throne for her son. This Merovingian queen ignited the imagination. She embodied the negative side of the ambitious mother who takes advantage of her position to obtain power, the opposite of the devoted Christian mother. With this fine strategic policy, she acquired immense power and great wealth by ingenuity, not being able to aspire to a non-official status at that time since there were no enthronement rites for queens. 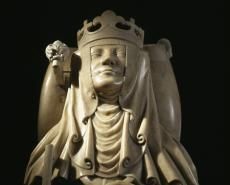 The depiction of Isabeau of Bavière, wife of the mad king who ruled in place of her husband, was highly tarnished. Speaking little French, unprepared and of little influence, she led an unsuccessful policy. A smear campaign was conducted against her by the Duke of Burgundy, so effective that it persists even today! She is accused of driving the King crazy, of adultery and giving birth to bastards. She was hated above all for her foreign origins and was suspected of spying on behalf of her original family. She was considered as the antithesis of Jeanne D’Arc.

The figure of the Queen mother

On the death of her husband, her son was still a minor; Blanche de Castille became regent of the kingdom, an exceptional deed for a woman at that time. Her reign was very complicated: her son Louis IX was threatened– he became Saint-Louis; pious and a stranger, she was accused of having an affair with the count of Champagne, and the papal legate, Romain of Saint-Ange. Blanche did not leave any authority to her stepdaughter, Marguerite de Provence. Being a mother and woman of power, she exerted her influence long after the marriage of her son. The queen mother returned to power whenever her son was sick or was on a crusade. 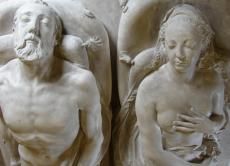 Catherine de' Medici is the figure of the queen-mother par excellence. She remained a long time in the shadow of her husband and his mistress Diane de Poitiers. But when Henry II acceded to the throne, she became Queen of France. Her son François became king after the sudden death of his father in 1559. He was a young and fragile king. Catherine discreetly exercised power and authority. When the king died, her other son, then a minor, took over the crown. It was out of question that she become regent but she obtained the title of Governess of France. Intelligent and experienced, she reigned via her son. This never-before-equaled mediator preserved the unity of the kingdom in that very troubled period which witnessed eight religious wars. She was wrongly accused of the massacre of Saint Barthelemy. This role of scapegoat eclipsed her incredible work and perseverance.

Some important female figures passed through Saint Denis. Jeanne d’Arc, woman warrior par excellence, laid down her arms, one of her swords and armor, after her failure, at the walls of Paris. 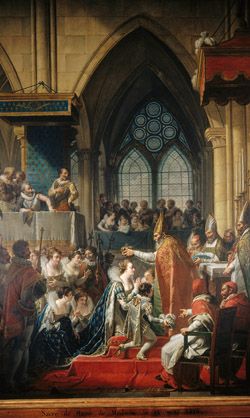 Coronation of Marie de Médicis, wife of Henry IV of France, at Saint-Denis, May 13 1610