The Banque de France edifice, which was built during the 19th century, is an example of what we call "urban monument". 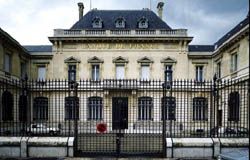 From the beginning of the third République, the definition of "monument" evolves. First considered as an exceptional piece of architecture, the monument becomes a sign of power shared by the political authority and the wealthy. Buildings hosting insurance compagnies or financial groups become examples of this new type of architecture. Other public buildings such as museums, libraries or city halls also represent this art.

From the 19th century to the WWI, the urban space was a neutral element. This uniformity of the landscape accentuates the "monument aspect" of a building. Furthermore, being built on a different scale makes it more imposing contrary to the other ones.

The Banque de France, located in Saint-Denis, is a perfect example. This edifice reflects French classicism art but also the characteristics of a mansion, with a Neo-Louis XVI style. The two aisles are linked to the main building. The only balcony is located on the second floor, called the "Bel Etage", and was reserved for the owner of the house.

Thanks to the development of steel industry, iron is used for the inside decoration such as the staircases, but also on the facades. The fence, made of cast or wrought iron, becomes an important element of the setting. The fence is the limit to secure the private space.