The Johnson factory in La Courneuve 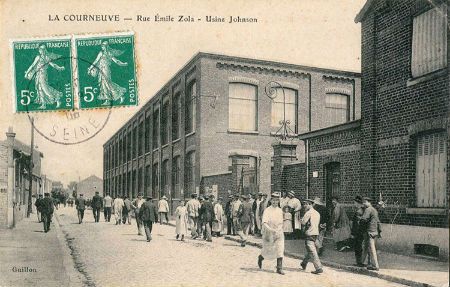 The Johnson factory, a machine tools producer destined for shoe manufacturing professionals, leaves Paris and settles in La Courneuve in 1907, along the railroads. Alfred Johnson takes example on what he saw during a trip to the United States to design the architecture of the building. A first 3-levels parallelepiped building is constructed with a cast iron structure including an outhouse workshop, an accommodation for the watchman and an engine room. In 1910, a fourth level is added connected to the workshop. The factory hired 64 employees in 1909 and 150 in 1914.

Aciéries de Champagnoles, created in 1788 in the Jura by the Muller family, take the Johnson factory site over in 1920 to settle a steal warehouse. Depending on the years, the factory employs 62 to 105 persons. Paul Faber, the founder, but also the director of the Mécano factory located next to them, procured special steal to make precision tools.

Since 1981, the building now houses a library, a night club and a restaurant.