History of the Six Nations tournament 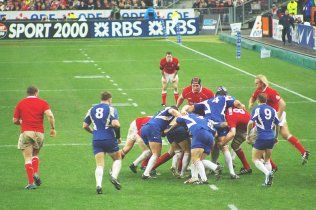 Just in case it has escaped your attention, we are deep into sports in France just like in most countries. The annual rugby Six Nations Tournament fought by England, France, Wales, Ireland, Italy and Scotland takes place each year between February and March. It is rugby at its purest, no frills, no half-time shows, just a bunch of burly, sturdy rugby men fighting for their country. The matches take place very weekend during the tournament.

In even-numbered years, the French national team receives England, Italy and Ireland. In the odd- numbered years, it is the turn of Wales and Scotland to join in the rugby battle in the arena of Saint Denis.

To prepare your journey to Paris for the match day of the 6 Nations tournament, here are some recommendations to find an ideal deal hotel room at the best rates near stade de France.

The Six Nations Championships is the oldest rugby championship in the world. The beginning dates from around 1882. Originally, the four United Kingdom teams were England, Scotland, Wales and Ireland, France joined in the year 1910 and Italy in 2000.

Stadium hosting the tournament in France

Historically, France played internationals at venues such as Parc des Princes and the Stade Olympique de Colombes both located in Paris. Since moving out of Parc des Princes at the end of 1997, France’s main home venue has been the Stade de France in Saint-Denis.

Yves du Manoir stadium: The Olympic stadium was the main venue for the 1924 summer Olympic games and rugby was one of the sports. The tournament was first hosted from 1920 to 1972 at the Yves du Manoir stadium in the district of Colombes in Paris-Haut de Seine territory.

Second only in importance to the World Cup in Europe, the Six nations tournament has become the most significant rugby competition played every February and March by the giants of European rugby players. Saturdays see the kick-off of the Six Nations, the annual international rugby union centerpiece tournament, and the stadiums become the battlefields in London, Paris, Rome, Dublin, Edinburgh and Cardiff for the nations to become European champions.

Each of the "home Nations National side" plays a total of five matches over a course of six weeks. There is no Knockout stage or playoff. The tournament ends in March and the team with the best record is awarded the Championship Trophy. If a side wins all its matches it is said that the team has won the "Grand Slam".

In Rugby, a Grand slam which in French means "Le Grand Chelem" occurs when one team in the Six Nations Championship or its predecessor – Five Nations – manages to beat all the others during a one-year tournament competition.

France played for the first time at Stade de France stadium. Pierre Villepreux and Jean Claude Skrela were the coaches of the national team. Discovering the new Stade de France stadium rugby pitch led to a certain apprehension for the National French team, a feeling made even stronger since they were playing against the big favourite at the time, the English team, on the 7th of February. Boosted by the team’s leader, the young Raphael Ibanez, the highly motivated French team played a fantastic match scoring 24 -17. In one of the most famous French moves ever, Philippe Bernat-Salles can boast of being the first to score a try on the Dionysian pitch of this new Stadium.

The second rugby match for the French national team at Stade de France was more complicated but they made it 18-16 against Ireland who had initially taken the lead by ten points. The XV of France managed to beat Scotland 51-16 and Wales 51-0. Wining the sixth Grand Slam.

In 2000, the Italian rugby team joined the tournament and it became the RBS Six Nations. For their first match, the Italians beat Scotland in Rome. France welcomed its Alpine neighbor on the 1st of April 2000 at Stade de France. The French team won 42-31, Castaignede, Pelous, Benazz managed to score a try as well as both of the tries by Penaud. The addition of Italy to the tournament had little initial impact on the tournament in which it finished last that year. The team managed to avoid last place four years later in 2003. Italy has not yet come close to winning the championship.

In 2002, the annual tournament was won by France in a Grand Slam. It is the seventh Grand Slam of the history of the French Rugby team. Gerard Merceron was the highest scorer in the French Grand Slam in this year of the Six Nations Tournament with 80 points. He added to this year’s collective performance, the best records of points scored by a French player in the tournament. Gerard Merceron, the fly-half of the team occupies third place in the international rugby hall of fame. He amassed 80 points including 50 points scored at Stade de France, with a try, transformations, eighteen penalties and a drop-goal. He can boast of being in line with the English rugby man Johnny Wilkinson with 89 points in 2001 and the Irishman Ronan O’Hara with 82 points in 2007.

A fly-half is a crucial team member who possesses leadership and can order the back line. They are usually the first to receive the ball from the scrum-half following a breakdown, line-out or scrum. A fly-half needs to be decisive in the action he takes and he has to be effective while communicating with the outside backs in a game. 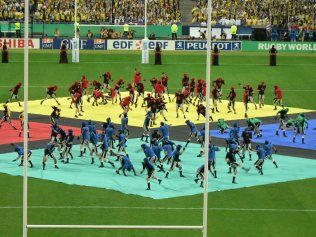 Dimitri is a crucial team member who currently plays scrum-half for Biarritz and the National team. During the 2004 Six Nations Championship he made his position as the first choice to be scrum-half for his team cementing his position with a virtuoso goal-kicking performance against England. France beat England 24-21 on the 27th of March. Dimitri Yachvili, the number 9 scrum-half scored 19 points with a try, and penalties. France won the eight Grand Slam.

Rivalry and competition between France and England

On the 15th March 2014, Ireland won the tournament, beating France 22 to 20. It was the last match for a true legend in rugby : Brian O’Driscoll. Interesting to note, it was in this same stadium that on the 19th March 2000, the young Irish centre, just starting out on his international rugby career, made a name for himself by scoring 3 tries against France. This feat is know as a "hat trick". Brain O’Driscoll went on to score 26 tries in the tournament – a record.

O’Driscoll is right when he states that success of the Irish team over the last 15 years was not just because of him alone. He has been surrounded by some exceptional players. The success at Stade de France stadium winning the tournament in March 2014 was one of the days where O’Driscoll genius was Ireland’s game-breaker.