This area dedicated to space exploration at the Air and Space museum Paris Le Bourget relates the passionate history of space adventurers and technologies that allowed them to write the history of space flight.

What to see in the conquest of space hall ? 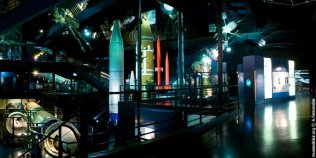 Models of rockets, satellites and spacecraft (Spoutnik, Voyager and an authentic Soyouz spaceship), including a large choice of audiovisual clips, allowing us to better understand the history and stakes involved on the conquest of space in a hall covering 2,500 m2. Large-scale animated presentations show the trajectory of the space rocket Ariane 5 and mission Apollo 11. Discover the big names in the conquest of space : the father of modern astronautics Constantin Tsiolkovski, the astronaut Jean-Loup Chrétien, etc.

What else to see at the Air and Space Museum

On March 6, 1998 the scale 1 model of Sputnik is installed at the Air and Space Museum in Le Bourget. It is the first artificial satellite put into orbit around the Earth. This model is exhibited in the Space Hall where you can hear its famous "beep-beep"!

On July 7, 1995, Helios 1A, France's first intelligence satellite, was put into orbit on Ariane's 75th flight. The Air and Space Museum at Le Bourget has, as part of its collections, the cuff of Ariane 40, which launched the satellite.

On February 22, 1986, Ariane 1 lauched the satellite SPOT-1 (Satellite to Observe the Earth), the earth is now observed by a French satellite.

10th February 1983, the model of the "Tiberius" rocket left Meudon to land on the ground floor of the Hall of Air and Space Museum in Le Bourget.

On February 3, 1966, The Soviet probe "Luna 9" landed softly on the Moon, at the place called Storm Ocean, and transmitted the first images of the lunar ground.