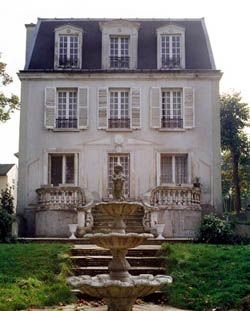 This little house located rue de la Pelouse, in Neuilly-Plaisance, might seen to be trifling. Yet, it is not. Built during the reign of Napoleon III, it is the example of a trend that had its glory during the war of styles in the 19th century.

While eclecticism was overusing historical decorations, a new way of construction appeared. Simple but paying attention to details, the architects use new materials: it is called rationalism. The two most important persons using this style are Henri Labrouste (1801 – 1875) and Eugène Viollet-le-Duc (1814 – 1879), the architect in charge of the restoration of the Basilica of Saint-Denis and the builder of Saint-Denis-de-l’Estrée, also located in Saint-Denis.