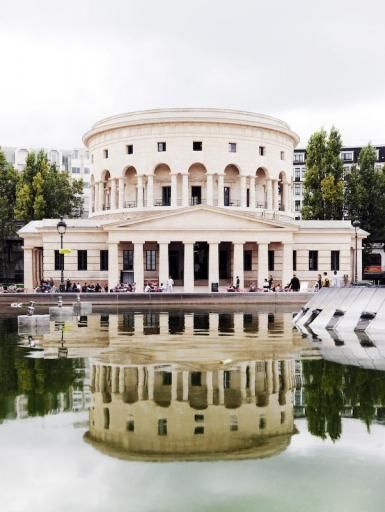 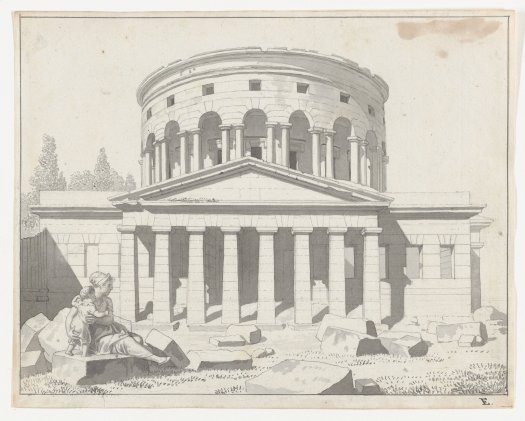 "Ah!  Mr Ledoux, you are a terrible architect !" wrote Louis- Sébastien Mercier in his “Tableau de Paris”, outraged at "seeing the taxman’s lair metamorphosed into a palace of columns, which are real fortresses"  by Claude-Nicolas Ledoux, the « Barrières » architect. Remember that the perimeter wall for the tax collector was for tax purposes only and non-defensive.

All goods entering the city were taxed. Two thirds of these rights went to the State, the rest to the City where it was used for an important part of its resources. The tax collectors were in charge of collecting fees on coming through the "barriers".  Fraud was rampant and very well organized, especially by wine merchants and innkeepers because wine and spirits were the goods that were most taxed.

To limit fraud, Lavoisier presented in 1784 a project for the construction of a wall.  A Chorus of protestations of all kinds rose from tax-evaders, and owners who had settled outside the boundaries of the former excise duty, and who would,  henceforth have had to pay taxes. The anger from the people living in the suburbs was even greater, as contrary to what had been expected,  it was not the Town that paid up but the king, using the peoples taxes. Construction work was entrusted to the architect Claude-Nicolas Ledoux whose luxurious methods used in the construction of excise duty buildings  began to irritate people and they began to speak about "triumphal arches for offices built on Faubourg Saint Martin (La Villette) and Saint Denis." Calonne, General finance Controller under Louis XVI,  supported Ledoux because the conception of these excise duty offices was in direct line with the idea of Enlightenment  and an expanded urbanism and, in addition,  they contributed in clearly marking the periphery of the capital.

La Rotonde de la Villette is the only vestige of an asymetrical ensemble which included two barriers : Saint Martin barrier and Pantin barrier, the first one  located next to the present rue des Flandres, the second located on the former road called Pantin or Allemagne,  currently avenue Jean Jaures. These two custom barriers, both with identical pavilions, today disappeared,  were linked to the rotunda by a gate.  As for La Rotonde, it was intended to accommodate offices but also to house "gabelous", sedentary controllers who were responsible for ensuring employee security against  tax evaders who were sometimes a little too vindictive. The building was made up of two solids : the cube, symbol of stability for Ledoux, and the cylinder. To simplify, it is possible to say that the Rotunda  architecture is in fact a cylinder pressed into a cube.

The tailbay section of Ourcq Canal, in front of the Rotunda, consisted in the  early nineteenth century, of a vast artificial-lake very popular with Parisians. They came to practice water games, to swim or to skate. Several references are proof of these leisure activities. Around 1840, the building housed two Infantry batallions and a squadron of cavalries of the municipal guard. On the plans at that time, it was called the "gendarmerie". Annexation in Paris of land situated in Paris between the old limits of the capital and the fortified wall that Thiers had built between 1840 and 1845 pushed the limits of the customs barrier. The customs offices, since abandoned, the Rotunda served as a warehouse for salt (the particular law to which it was subject was removed in 1945), the customs warehouse was transfered to Canal Saint Martin in 1860. It was then rented out, in 1865, to the "Compagnie des Entrepôts et Magasins Généraux" General Warehouse company and Shops. It was to remain thus until 1921. Its buildings, restored in 1865, and then, after a fire started by the communards in 1871 damaged  La villette docks, they were used as customs warehouses by EMGP. The building was also known as "Customs" in the atlas of the twenty arrondissements of Paris made in 1868.

It is amazing that the Rotonde was spared during the construction of the elevated metro line, built at a time when the architecture of Ledoux was strongly criticized. It is obvious that the building was deliberately preserved considering the S curve of the line 2 viaduct which skirts the Rotunda. A fire destroyed the Rotunda and its offices in the mid-1930s. Restored, several projects emerged but did not go any further. Finally, a decision made by Paris town authorities on 19th November 1959, attached the Rotunda to the Vieux Paris  committee, an administrative committee with the mayor of Paris as President. In recent years, the “Vieux Paris” committee moved, leaving the Rotunda empty, and which is now a restaurant.