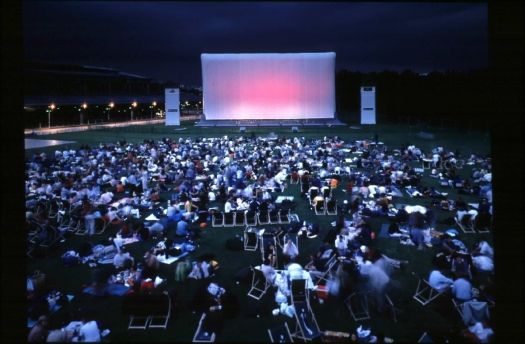 Open Air Cinema at Paris La Villette is a not-to-be-missed summer evening event in Paris! Every summer, for more than 20 years, the prairie du triangle in the Parc de la Villette becomes the largest open air movie theater in Paris.

Now emblematic, this free festival is an opportunity for the public to discover or rediscover cinema masterpieces. Come with family, friends, neighbours, to laugh, to marvel, to tremble or to travel. With the largest inflatable screen in Europe (544m²), the 20,000 m² of lawn can fit about 150,000 movie fans over one month to watch movies on a large outdoor screen, making this open air cinema at la Villette particularly special, rich with a varied program.

Every wednesday, you can enjoy a garden party at Jardin 21* before your film. You can also go on a gourmet cruise every saturday and sunday before the screening.

Program of the outdoor cinema in July 2019

Program of the outdoor cinema in August

Program may be subject to change. For more information: visit La Villette website. All movies at La Villette will be in the original version subtitled in French.

Opt for a cruise on the Canal de l'Ourcq, and come back in time to enjoy an open air movie.

The roof of the Arch of La Défense, visit between sky and earth