Before its disappearance and its replacement by market gardening, viticulture in Seine-Saint-Denis and throughout the Paris region was well established. Today, the Paris region has about a hundred small vineyards. Since the end of the 1980s, county councils, communities and individuals involved have been replanting vineyards for cultural and tourist purposes. All of them develop educational activities with schools, but also for the general public, especially during the grape harvest celebrations that take place in September and October. Seine-Saint-Denis, too, has revived this tradition and several vineyards have been replanted. 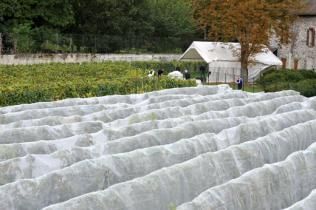 The Clos blanc-mesnilois is one of the first wines to have been replanted in the department, in 1988 at the Parc Jacques-Duclos, in Le Blanc-Mesnil (near Paris). Since then, its 1,300 vines plants have been producing a Chardonnay, the "Clos blanc-mesnilois", which can be tasted every year during the Environmental Days organized by the municipality in the fall. The wine is cultivated by Christophe Besselièvre, the municipal winegrower, who during the presentation explains the size of the vine plant. Francis Gourdin, oenologist, explains that: "It is both a cultural and educational wine... It is a resurrection and a maintenance of roots and tradition. It will be passed on to the next generations through the schools who have the incredible good fortune to come to these vineyards and see how the wines are cultivated and how wine is made...". Only the elders of the commune have the privilege of tasting, once a year, on the occasion of their banquet, the aromas of this wine, which cannot be found in the shops.
Crédit photo : Americo Mariano 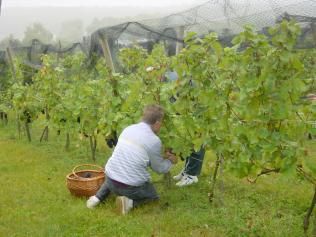 The Clos de Bréon, in Coubron, was relocated in the heart of the village, not far from the orchards, in 1997. The land of 2,200 m2, composed of several plots, allows the vines to grow there with ease. The 600 vines are from different red and white grape varieties: pinot noir, pinot Meunier and Chardonnay. They are mainely growned and exploited by the Brotherhood of the Clos de Bréon, which organizes educational visits in conjunction with the Maison de la Nature, the winegrowers' festival in October, a parade during the Grand Chapitre of the Brotherhood in May, early morning, to learn how to prune a vine, etc

Vineyards on the banks of the Seine at Épinay

The town hall of Épinay-sur-Seine reintroduced some 500 vine plants of Pinot gris in 2003 within the Gouraud Park. This vine is located on the banks of the Seine, on the left of the town hall and is south-facing. A panel shows a photo, dating from the beginning of the 20th century, showing vines on the banks of the Seine, at about the same place as now.

In 2008, about thirty Chinese visitors, visiting Europe as part of their work for the Chinese agricultural statistics office, walked through these vineyards, very attentive to the explanations of Patrice Bersac, president of the Association of Ile-de-France winegrowers. "Technically, the Epinay vineyard is one of the best in the region," he explained. An in-depth study on the nature of the soils and the grape variety was carried out before planting the vine, which now produces a quality wine". At the end of the morning, visitors from the East warmed up in the town hall by tasting the 2006 vintage while the 700 bottles of the 2007 vintage were labeled before their eyes.

The vineyard of Epinay-sur-Seine is maintained by the municipality, under the guidance of a viticultural technical adviser. The dry white wine it produces, called "Les Terrasses d'Épinay", is sold by auction every year at the Christmas market, to benefit charity.

Other wines in Seine-Saint-Denis

The Clos des Collines de Gagny, which exists in white wine and red wine, won a gold medal in 2000. About four hundred and fifty vine plants of Gamay, Beaujolais and Chardonnay were planted at 66 rue Contant in 1990. Each year its wine is distributed at the Gagny Grape Harvest Festival at Courbet Park, with the proceeds going to the Centre Communal d'Action Sociale.

Between the plots for cereals, orchards and beehives, the Montfermeil vineyard has been extending since 2002 in the Jean-Pierre Jousseaume Park, or Parc du Sempin. An association, the Clos Jean-Valjean, was created at the same time in order to "perpetuate an extinct tradition, due to a lack of winegrowers, by carrying out a harvest every year", to "organize wine festivals" and "teach children the traditions of yesteryear".

Vineyard of Vieux Poirier and vineyard Bel Air in Neuilly-Plaisance

Located in the heart of the protected area of Alisiers, on the Plateau d'Avron, in Neuilly-Plaisance, the Vieux Poirier vineyard is carefully maintained by the Association des amis naturalists des Coteaux d'Avron (ANCA). It produces a white wine made from Chardonnay grapes planted in 1992. Neuilly-Plaisance has had a second vineyard, that of Bel Air, since 1995. Its owner, Pierre Facon, produces a sparkling prosceco there and regularly gives tours of his 600 vines plants, while explaining how to prune the vine or how to identify the grape variety from the shape of the leaves. 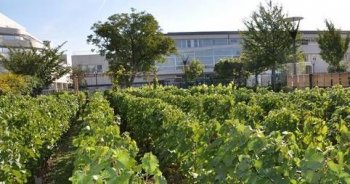 The Noisy-le-Grand vineyard consists of about 400 vines planted in 1999 in the Jardin des Artistes (artists garden). The Clos Saint Vincent celebrated its 20th anniversary in 2019! Thanks in particular to the work of the Confrérie du clos Saint-Vincent and an oenological engineer, the wine, which blends chardonnay, seyval and sauvignon, was awarded the silver medal of the Ile-de-France vineyards for its 2004 vintage.

Reconnecting with the wine-growing tradition of Rosny-sous-Bois (the cultivation of wines existed there from the Middle Ages until the 19th century), the association of the Brotherhood of the Feronne Haute strives to promote the wine heritage of the town. 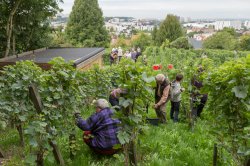 It is on this very site where the "petit vin de Rosny" was once produced, in the Parc Jean Decesari, in Rosny-sous-Bois, that the Féronne Haute vineyard, with its chardonnay and sauvignon grapes, was replanted in 2000. Located on a former gypsum quarry well exposed on the hillside, the Clos de la Féronne Haute is a center of animation that protects and enhances this heritage. The first harvest of these 1300 Chardonnay vines plants took place in 2003 with a production of 115 liters to reach 1000 liters in 2011 (average 700 liters per year) right in the center of Rosny sous bois! Since then, members of the association Autour de la vigne de la Féronne Haute and the Confrérie de la Féronne Haute or simple visitors have been taking part in the grape harvests and various events. Discover the photo report on the vineyards of Rosny-sous-Bois by Aurélien Vila.

Saint-Ouen returned to its wine-growing past in the early 2000s. On the Quai de Seine, 250 feet of chardonnay were planted by schoolchildren and the elderly, under the impetus of the town hall and in partnership with the general council. At the foot of the Vieux Saint-Ouen church, the vine plants are a reminder that for centuries, Saint-Ouen was a village of winegrowers. A tradition that still brings together every year the Audonians at harvest time.

Finally, the most recent and largest, the Sausset Departmental Park vine was planted in October 2004. Its some two thousand three hundred vines plants of chardonnay and pinot noir make this vineyard the second largest in Ile-de-France. Every year, the Sequano-Dionysians (name of the inhabitants of the department of Seine-Saint-Denis) can discover and taste it during the Fête de la Vigne et des Saveurs.