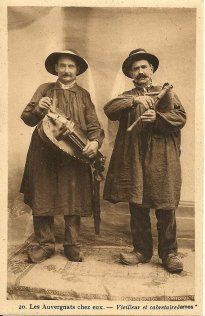 From Auvergne to Paris

From the mid-19th century, France experienced important internal migrations. Driven by poverty, many people moved from Brittany or Auvergne, a former volcanic region in central France, to Paris. They took their culture with them to the capital of France. Most of them settled first in the Bastille neighbourhood. Then, “Auvergnats” settled in the working-class districts of Paris.

Auvergne was a coal mining region. Even before the 19th century, many “Auvergnats” shipped coal from their region to Paris. Some of them settled in Paris and carried out heavy works such as scrap merchant or coal peddler. They wore a specific costume: leather wide-brimmed rolled up hat, peasant velvet or sheet-like fabric costume, large blouse, red scarf around the waist, a jute hessian to protect the head when they carry sacks of coal. Over time, “Auvergnats” made their way as small traders. Their community was very tight-knit. Near Bastille, rue de Lappe became the “Auvergnats village”. Many of their stores handled all sorts of metal but “Auvergnats” opened cafés which also sold wood and coal. These cafés, called “Bois et charbon” (wood and coal) were not only located in rue de Lappe but in other working-class districts of Paris. Parisians nicknamed them “bougnats”, contraction of the French words “charbonnier” (coal merchant) and “Auvergnat” - “Charbougnat” and then “Bougnat”. 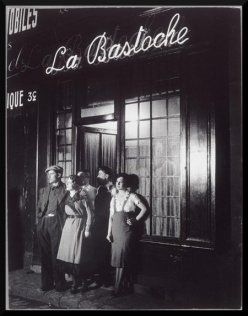 Over time, rue de Lappe became a place for popular balls called “Bals musette”. Musette was the name of different musical double reed instruments among which was the “cabrette” traditionally played in Auvergne. At the beginning of the 20th century, the accordion of Italian immigrants replaced the cabrette in the music balls and waltz replaced traditional dance from Auvergne. In the 1930s there were more than 15 “Bals musette” in rue de Lappe. Thugs liked to go to “Bals musette” and gave a bad reputation to rue de Lappe. “Auvergnats” left the street little by little.