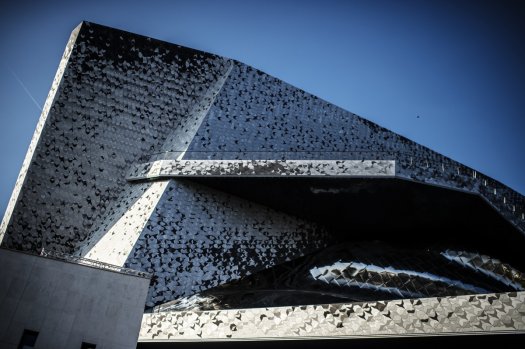 Notice to birdwatchers, there is a species that has not yet been identified by the League for the Protection of Birds (LPO in French) in the Parc de la Villette. Make your way to Porte de Pantin and  the Philharmonie de Paris. Are you there? Look up and admire.

Inventory of the birds of the Parc de la Villette

According to Frédéric Malher, regional delegate of the LPO Ile-de-France (Parisian region), there are 27 species of birds that nest more or less regularly in the Parc de la Villette. We can also observe about fifteen species in winter or during migratory passages. If we add to that the species observed occasionally, we arrive at a total of 81 species (in 6 years).

There is however a strange bird which does not enter the inventory drawn up by the LPO in the park la Villette, it is the one which flies by hundreds of thousands on the Philharmonie of Paris.

The Philharmonie de Paris, extension of the park 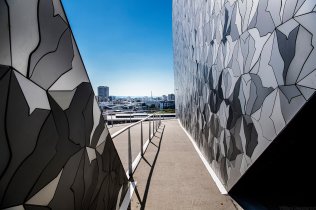 Architect Jean Nouvel imagined the Philharmonie de Paris as an almost natural extension of the Parc de la Villette. The building, located right next to the Cité de la Musique (designed by Christian de Portzamparc), provides perfect walking space. Take the ramp that runs along the facade to get closer to the birds... and enjoy the unique view from the belvedere over the Parc de la Villette and the Paris suburbs.

With its monumental dimensions, the Philharmonie de Paris can be seen from afar. But it is only when you get closer that you can see the flock of birds that adorns its facade and its square: a gigantic mosaic that reflects the sky and comes to life with the sun's rays... 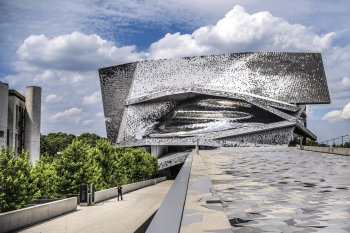 The birds of the Philharmonie de Paris are impressive in terms of their quantity as well as their design technique.

The 340,000 birds come in seven shapes and four colors - from light gray to black. Nearly 265,000 birds made of aluminium sheeting are installed as cladding on the façades. The remaining 65,000 birds are used for the forecourt, the access ramp and part of the acoustic roof of the Philharmonie's Great Hall.

The manufacture of the birds involves many stages and is a technical challenge: melting of the aluminium ingots, injection under pressure into a mold, sandblasting, acid baths, cutting of the granite counterparts, fixing of the facings with self-tapping screws... This report was filmed on site in 2014. It shows the work of the Bouygues Bâtiment IDF teams who were responsible for supplying and installing 80,000 cast aluminium birds to cover one of the most emblematic buildings in north-eastern Paris. 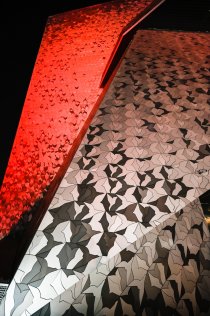 Unlike the swallow (for which nesting boxes have been installed at the Grande Halle de la Villette), there is no season to observe the strange bird of the Philharmonie de Paris. Winter or summer, day or night, he struts in front of the walkers and offers himself with grace to all the photo shots!

Before a concert or after an exhibition at the Philharmonie de Paris, let your mind fly with this famous bird or strike a pose with him. In any case, its poetry will touch you.

Learn more about its architecture and the Renaud exhibition (October 2020-November 2021).

Learn more about the flora and fauna of the parks in Seine-Saint-Denis.