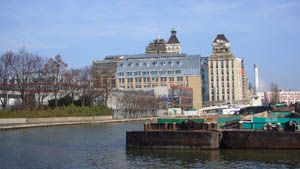 Until the end of the 19th century, Seine-Saint-Denis had been mainly rural. The industrialization of the area marked the development of three major axes: Saint-Denis, Pantin and Aubervilliers. More than half of the industrial implantations were located in Saint-Denis where the new growing zone is the road between Calais and Paris (current Président Wilson avenue). The Pantin and Aubervilliers implantations were much easier once the Saint Denis canal and the route de Flandre became major transportation routes. The canals played an essential role in the industrialization of the area. With the first wave of industrialization, from 1860 to 1872, the complex of the Saint-Martin-canal, the Saint-Denis canal, the Ourcq canal and the bassin de La Villette represented the 2/3 of Parisian transportation in 1872. They dispatched building materials, wood,  coal, etc all around industries. Although this waterway complex is still used for industrial activities, it is now mainly used for tourism activities as L'Eté du canal. The bassin de la Villette and the Ourcq and the Saint-Denis canals even became part of the region's landscape heritage.

The Paris canal appeard after the May 19th 1802 decree. Napoleon Bonaparte decided to make it pass after the prefect Chaptal had told him parisian people wanted water.

The incorrect use of the expression “Paris Canals” omit the fact that these three ways are one and the same. The upstream branch, Saint-Martin canal, and the downstream branch join at the Villette basin where the waters meet. The canal de l’Ourcq provides the necessary water to the other two. These three parts are inseparable and form the Paris canal.

Paris canal was designed to facilitate the junction between the upstream Seine and the downstream Seine. It permitted inland water shipping from the Marne, Haute-Seine and Yonne departments, to communicate with the inland water shipping of Paris, Basse-Seine and Oise thus avoiding the difficult crossing through the capital. Not only did the canal de l’Ourcq provide water to the others: it also guaranteed good quality and quantity of water to Parisians.

Two projects, one by the engineer Jean-Pierre Brullée, in the last years of the Old Regime, and one by François Bossu, approved by the directory, prefigured the canal de l’Ourcq as it is today. But Napoleon finally preferred Pierre-Simon Girard’s project.

Digging of Saint-Denis Canal started in 1811. It was based on a trail covering 6.6 km. It went through Aubervilliers and Saint-Denis then it joined the Seine downstream to the lock La Briche. Twelve locks, some of which were coupled, allowed for a total levelling of crossing measuring 28.34 meters.

Levelling work was interrupted in 1815 because of the advance of the allied troops during the Napoleonic wars. The canal was then used as a defense. The opening finally took place on May 13th 1821 during the baptism of Monseigneur le duc de Bordeaux (grandson of Charles X).

When the city of Paris bought the concession, the condition of the canal was very poor. The new canal service of the city of Paris was faced to many constraints. The two main ones were to increase the operating draught of the water and to rebuild locks to allow the passage of bigger boats.

From 1864, Saint-Denis canal was gradually rebuilt. Today it counts for 7 locks including Flandre bridge. This lock with its 10 m of difference in height held the world record until the 50’s. 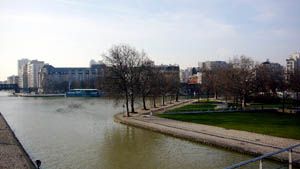 Paris Canals were created for two reasons: sailing and water conveyance. Finally approved at the end of the French Revolution, Canal de l’Ourcq had to solve the chronical lack of water problem of Paris. Until the end of the 18th century the Seine was the main source of water for Paris. Already in 1528, the city had figured to make the river Ourcq navigable in order to link le Valois to Paris, allowing boats to sail down the canal, from the Marne to Paris. But there was no canal project. Works were finished in 1636.

The idea of a canal that could link the Ourcq to the Seine emerged with Pierre-Paul Riquet’s intervention, the creator of Canal du Midi. In 1676. He obtained the patent letters permitting him to buy the plots required for his project. Works were quickly stopped after Riquet’s death in 1680.

In 1785, Brullée, a wooden framework engineer, considered the possibility of a derivation of the Ourcq Canal approximately following the trail planned by Riquet. The proposal was accepted by a decree of the 30th of January 1791, but several issues suspended its execution. Finally, the decree of the 17th of May 1802 ordered the derivation of canal de l’Ourcq to direct it to a basin near la Villette, in northern Paris. The State took over the related costs.

The initial project was to have a canal going through Saint-Denis and linking the Oise river to the Seine crossing the Villette basin. The implementation of the Canal de l’Ourcq project was ambiguous: Providing water to Parisian people was it its only aim or did it have to answer sailing needs? The imprecise terms of the text allowed every possible interpretation. The 13th of august 1802 decree that ordered the beginning of construction works was no longer explicit. With the arrival of Pierre-Simon Girard (1765-1836) the following month, head engineer of  canal de l’Ourcq, the Ourcq quarrel flared!

Girard was hardly back from Egypt, where he was assistant director of Ponts et Chaussées during the Bonaparte expedition, when he took charge of the project. Bonaparte protection could explain his nomination, but he was under the order of the Seine prefect to whom the engineer had to report progress. Tension increased between those responsible for the canal and Ponts et Chaussées engineers generally in charge of important works. Furthermore, Girard expressed his will to be free from this state corporation authority. This conflict of responsibilities was the real reason for the technical debate that occurred after. Finally, 8th March 1805, after three years of friction, Bonaparte brought together those involved in the project to decide the navigability of the canal. The emperor took a decision and followed Pierre-Simon Girard’s arguments. Meanwhile, the latter obtained support from Paris Chamber of Commerce, that favored  smaller navigation. The first waters arrived in La Villette Basin in 1808 but at that time, the waters came from La Beuvronne only. After the opening of Saint-Denis canal in 1821, canal de l’Ourcq opened the following year and then canal Saint-Martin in 1825. 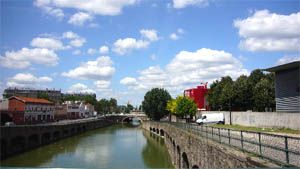 During the second half of the 20th century, boat transport gave way to train transportation. Saint-Denis Canal maintained, however, important activity because of firms built on the canal, along Plaine Saint-Denis.

Even though the banks have been redeveloped for leisure activities, Saint-Denis canal still preserves its industrial aspect.

Canal de l’Ourcq has also been redeveloped with a “green path” transforming it into a perfect place to stroll and relax. The development of former boat canal towpaths facilitates access to the banks. Locals enjoy the pleasure of walking or cycling along it.

The boat remains the best way to discover canal  de l’Ourcq thanks to water tourism. A cruise allows you to discover the history of sites that can be seen on the path from La Villette basin to Pantin “Grands Moulins” building. It is possible to go on a boat trip from Paris to Meaux (a town located 55 km away from Paris). You just have to hop on board in Paris, Quai de Loire for a scenic voyage out of time, along the water.