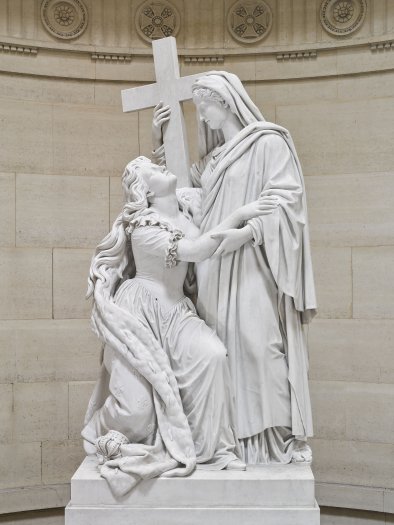 Considered by Chateaubriand as "perhaps the most remarkable monument in Paris", the Chapelle expiatoire is located in the 8th arrondissement of Paris, at 29, rue Pasquier. It was built in the square Louis-XVI, on the site of the old cemetery of the Madeleine where the bodies of Louis XVI and Marie-Antoinette were buried before their transfer to the Saint-Denis basilica.

A place of history and meditation

The first stone of the Chapelle expiatoire was laid on January 21, 1815, the anniversary of the death of Louis XVI. King Louis XVIII wanted the monument to revive the memory of the royal family. He had the remains of his brother Louis XVI and Marie-Antoinette transferred to the basilica of Saint-Denis. Completed in 1826 under the reign of Charles X, the building celebrates the memory of Louis XVI and Marie-Antoinette, both guillotined on the Place de la Concorde during the French Revolution.

The monument is very solemn, with an entrance pavilion and an interior garden that lead to the chapel, once you have crossed the peristyle. The zenithal light highlights the white marble statues representing Louis XVI and Marie-Antoinette.

Designed by the architect Fontaine, the Chapelle expiatoire has long been perceived as a relic of the Ancien Régime. Several times threatened with destruction, notably during the Paris Commune, the monument was classified in 1914.

The memory of the Swiss guards killed during the capture of the Tuileries Palace on August 10, 1792, is perpetuated by the cenotaphs lined up on each side of the interior garden.

On the occasion of the temporary exhibition Des Structures (2018), the street artist Le Diamantaire invested the Chapelle expiatoire. He hid many diamonds there that children are invited to find and place on a map (available for free at the monument's reception) to win a surprise.

There is also a free booklet-game to learn with the family about the history and the decor of the Expiatory Chapel, as well as the will of Louis XVI and Marie-Antoinette.

A visit to be coupled with that of the basilica

To complete your visit, take line 13 to the Basilica of Saint-Denis, necropolis of the queens and kings of France, where the tombs of Louis XVI and Marie-Antoinette are located.