Notre-Dame of the Assumption church 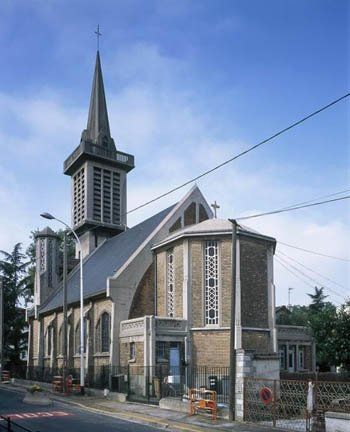 When in the years 1925-1930, the Church decided to step up the construction of religious buildings in order to Christianize the “red suburbs”, and before cardinal Verdier launched major projects, many buildings were built of bricks and concrete. This applied in particular to the churches of the Sacré-Cœur and Saint-Charles in Blanc-Mesnil, Saint-Louis in Drancy or Notre-Dame-of the Assumption in Neuilly-Plaisance.

The determination of a village

In the early twentieth century, there was no church on the plateau of Avron. Abbot Ernest Laforge did not cease to convince the bishop of Versailles of this absolute necessity.  In 1928, a woody site with a pond was yielded to the diocese for an almost symbolical fee. All they needed then were funds for the construction. A collection was organized with the local church community. Every inhabitant of Avron got involved : believers, nonbelievers, protestants, communists, freemasons and laic republicans provided financial support. The Project took shape and everything moved very fast. The plans designed by a local architect, Henri Conus, were officially presented on 21 October 1932 and the laying of the first foundation stone a few days later, on 11 November in the presence of a thousand people. It was during this ceremony that the future church was dedicated to Notre-Dame-de-Assumption.

An architect inspired by the Perret Brothers

Louis Barillet, the master glass maker created the high windows offered by the families of the church community to their church. On a geometric background of blueish shades, they show the image of Sainte Therese of the infant Jesus with roses slipping from his hands to the concrete floor.

During the war 1870, the Prussian artillery devastated the plateau of Avron during a memorable winter battle. To perpetuate the memory, an oak tree was planted in front of Notre-Dame-de-l'Assumption (which did not exist then) in the years 1880. More than a century old, it is surrounded by many trees in Neuilly-Plaisance, survivors of the immense forest of Bondy which covered a part of the commune until the middle of the nineteenth century. This forest of Bondy formerly sheltered the high road bandits and Victor Hugo set up the décor here of the encounter with Cosette and Jean Valjean.