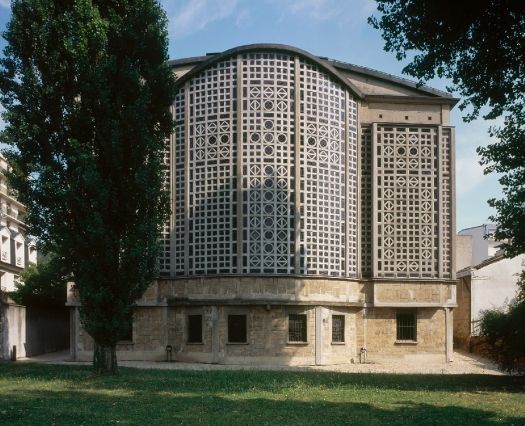 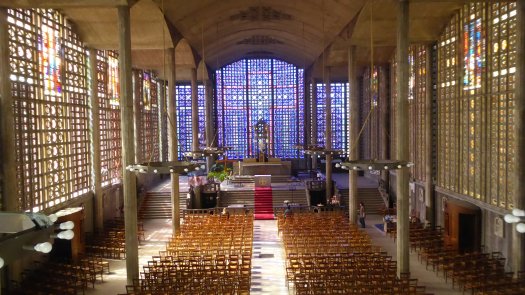 The Our Lady church in Le Raincy, also known as the "Holy Chapel of Concrete", is the first religious edifice made out of this material until then reserved for industrial construction.

The Architect brings the material to life

In 1922, Canon Negre, the pastor of Le Raincy, consulted the architect Auguste Perret for the building of a church. He had only 300,000 francs at that time and the most advantageous quote that was presented to him amounted to 1,800,000 francs. Perret took up the challenge. Money controlled the material used: he opted for concrete, which according to him, was adapted to all schools of thought, even the most daring. It was up to the architect to make a beautiful creation, to "highlight" the material. And so Auguste Perret built the church in Le Raincy !

Of Gothic inspiration, this concrete edifice reaches up to the bell-tower that dominates the 45 meters-high facade. Columns of concrete of decreasing size and framing the stained glass windows fit perfectly into each other in the manner of a telescopic antenna. The facades built in a concrete filigree allow daylight to filter through. The church construction lasted from April 1922 to June 1923 and the work was carried out by one of the architect’s brothers, the building-contractor Gustave Perret.

The son of a Belgian stonecutter, Auguste Perret (1874-1954) was along with his two brothers, Claude and Gustave (building contractors), considered as the initiator of modern architecture in his use of reinforced concrete. The building located on rue Franklin in Paris, marked a milestone: for the first time (1902), concrete, ceased to be a hidden auxiliary material and became the full visible backbone of the entire building. In 1905, the garage on rue de Ponthieu used effects that allowed Auguste Perret to qualify it as the "first attempt in the world of esthetic concrete". In 1911-1913, the Théâtre des Champs-Elysées became the masterpiece which emphasized new ideas and methods in architecture.

With Notre Dame du Raincy, Auguste Perret applied for the first time a hall formula of reinforced concrete (a double concrete wall bearing slender columns) that he developed in industrial buildings such as the docks in Casablanca. Above all, he drew an esthetic advantage: that of lightness and light, made possible by a structure that renounced all unnecessary fillings, following a similar logic close to that of Gothic architecture. The church is designed on a rectangular plan divided into three communicating naves. The natural declivity of the land had been exploited by the architect to raise the choir over the nave.

The walls of light by Maurice Denis 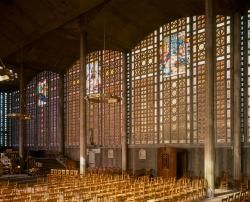 Auguste Perret replaced the exterior walls of the building with screen walls, a kind of open-grid concrete fitted with stained-glass windows, transforming them into walls of light. The stained-glass windows in Notre-Dame du Raincy are the artwork of the painter - artist Maurice Denis. Co-founder, at 18 years old, of the group "Nabis" (meaning the "prophets" in Hebrew) with Pierre Bonnard, Edouard Vuillard, Félix Vallotton and Paul Sérusier, Maurice Denis devoted himself to decorative arts and became the group’s theoretician. He advocated a painting with neatly defined contours (encircled) and flat colors (without a relief or depth) : a figurative simplification, like the works of Gauguin.

Related to symbolist literary circles, Maurice Denis worked towards an idealization of everyday scenes. He eventually devoted himself to mural paintings impressed with a very literary Catholicism and founded along with Georges Lavalières (author of the paintings in Notre-Dame-des-Missions du-Cygne-d'Enghien, the "Sacred Art-workshop". The windows in Notre-Dame du Raincy were made in the workshop of Marguerite Huré, master artist of stained glass. Despite its recent construction, Notre-Dame du Raincy is listed as a historical monument.