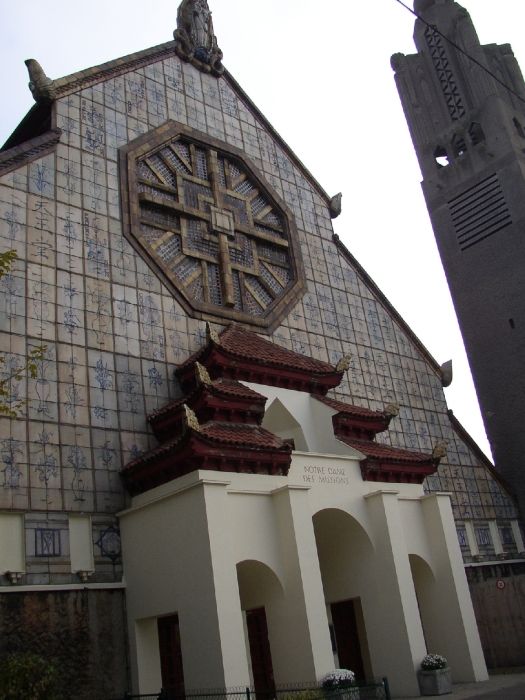 A true example of Sacred art from the 1930s, built in 1931 for the colonial exhibition in Bois de Vincennes, the chapel Notre-Dame-des-Missions was dismantled at the end of the exhibition and reassembled in 1933 in Epinay-sur-Seine.  It owes its double vocation on one part, to the fact that the colonial exhibition glorified the evangelization of colonies by the missionaries (Notre-Dame-des-Missions) and, on the second part, because reconstruction in Epinay-sur-Seine was made in the North East quarters of the suburbs « le Cygne d'Enghien », on land offered by Firmin-Didot (the descendant of the famous engraver-smelter who invented the word “stereotype”). This building was part of a big operation set up by the Church during the 1930s,  « Chantiers du Cardinal ». an association created in 1931 by cardinal Verdier to promote the construction and maintenance of catholic churches in Paris and the Paris region.

In the years 1925/1930, the church decided to Christianize the "red suburbs". Construction of Religious buildings multiplied. They used materials and the style from that era : concrete and brick. It was for this reason that the Sacré-Cœur church (1930) and the Saint Charles Church (1933) in Blanc-Mesnil, Saint Louis (1930-1933) in Drancy or Notre-Dame-de-L'Assomption in Neuilly-Plaisance (1932) were built.

Although less airy, the latter is pretty similar to the Church in le Raincy built by the Perret brothers. However, eligious buildings built during that period in all the suburbs were not enough to meet the urgent needs of this much demanded space. In 1930, Cardinal Verdier decided to develop the work undertaken. He travelled through the diocese and established that the construction of a hundred churches was necessary. The cardinal elaborated a large scale plan and contracted a loan. Success was total as from 1933 on the sixtieth construction site was inaugurated and in 1934, seventeen sites were opened simultaneously.

Between 1931 and 1940, one hundred and two churches were built in the Paris region by the « Chantiers du Cardinal ». A few of these churches are located in Seine Saint Denis: such as the church Saint-Yves des Quatre Routes in La Courneuve, built between 1931 and 1933 by the architects Michel Bridet and Pierre Robert : Saint-Jean- Evangelist, 1936-1935, Sainte-Louise de Marillac, 1936-1939, in brick and slate both located in Drancy.

Among constructions from that era, Notre Notre-Dame-des-Missions-du-Cygne in Enghien located in Epinay-sur-Seine, distinguished itself from its contemporaries first in the materials used, reinforced concrete. Moreover, the architect Paul Tournon, who had, a few years earlier, been the architect for the Saint-Louis church tower in Villemomble, realized an astonishing amount of styles, maybe because of its first function : the chapel represented at the colonial exhibition in Bois de Vincennes was dedicated to the glory of the catholic missionaries overseas. Amazingly eclectic, the church got inspiration from the architecture of the five continents featuring genuine quotes : the façade of the porch has three layered roof tops covered with hollow tiles decorated with Chinese characters, the loft features curved angles with Buddhist, fetishist and African influences, but the bell tower recalls the shape of a minaret. A blue and white ceramic décor was created by Lorymi and Raymond Virac.

The concrete sculptures of the bell-tower - minaret, illustrating the four human groups was designed by Carlos Sarrabezolles (1888-1971), who also created the twenty eight figures on the bell tower of the church  Saint-Louis at Villemomble. On the top, the virgin lying on a globe is the work of the sculptor Roger de Villiers.

Africa, Canada and Ireland illustrated evangelism of the colonies

Painters, sculptors and glassmakers, mostly from the Maurice Denis Sacred-Art workshops (responsable for the  stained glass in Notre-Dame in le Raincy) and Georges Desvallières, had, along with others,  worked on the interior decoration of Notre-Dame-des-Missions. Yet, the unity of style and theme gave to their collaboration a remarkable example of sacred art dating from the early thirties. The Louis Barillet workshop, a great renovator of modern stained glass, created a part of the triple apsidal. The characters represented, associated with the beginning of evangelization, are concentrated around the central figure of Christ as Missionary and are the works of the glassmaker Jean Herbert-Stevens (1888-1943). Among the other artists who designed and worked on the stained glass windows of Notre-Dame-des-Missions,  are André Rinuy, Marguerite Huré, Pauline Peugniez or Bideau.

Famous glassmakers shared  the church walls to make the frescoes, Henri de Maistre (1891-1953), who illustrated the lateral walls with the evangelization of the world since the resurrection of Christ, chose, for the background,  a map showing the great lakes and some major cities in Canada to place French martyrs.

The wall painting evoking the evangelisation of south Algeria and the Sahara by the priest de Foucauld (1858-1916) was made by Georges Desvallières himself. Georges Desvallières (1861-1950)  was a former student of Elie Delaunay and of Gustave Moreau before becoming, together with Maurice Denis, the initiator of the Sacred Art workshop. The side aisles on the right in Notre-Dame-des-Missions were decorated by Raymond Virac, Lucien Simon and Robert-Albert Génicot (1890-1981). These mural frescoes relate the evangelisation of Cochinchine and India by François Xavier and that of Japan by Navarette. As for the famous Irish missions of the monk saint Colomban (circa 543-615), they inspired Charles Plessard and Pauline Peugniez (1890-1987), the wife of Jean Hébert-Stevens. The left side of the church aisles evokes the evangelisation of the Greek and Roman worlds, Gaul and Great Britain, Germany and the Slave countries. Those responsable were Maurice Denis, Henri-Justin Marret (1878-1964), Valentine Reyre, Paul de Laboulaye (1902-1961) and Georges Ballot (1866-1942).

The colossal stone sculptures standing against the load-bearing walls of the chapel are the works of Raymond Delamarre. Born in 1890 (died in 1986), he was Jean Coutan‘s pupil. « Grand prix de Rome » in 1919.  Delamarre is known for the colossal size of his works as can be seeen with his monument to the glory of the « Defenders of Canal de Suez » (1929), the great bas-relief « Arts and Legends » for the cruise ship the Normandy (1929) or « Statues of Human Knowledge » on the top of Palais de Chaillot in Paris created  for the International Exhibition in 1937. In the nave of Notre-Dame-des-Missions-du-Cygne Enghien, the sculptor evokes four of the eight beatitudes pronounced by Saint Mathieu during his Sermon on the mountain in Syria. The other four beatitudes are the works of Anne-Marie Roux-Colas (born in 1898). The church of Notre-Dame-des-Missions-du-Cygne Enghien has been listed as a historical monument since 1994. In 2007, different general restoration works were carried out or are still in progress.