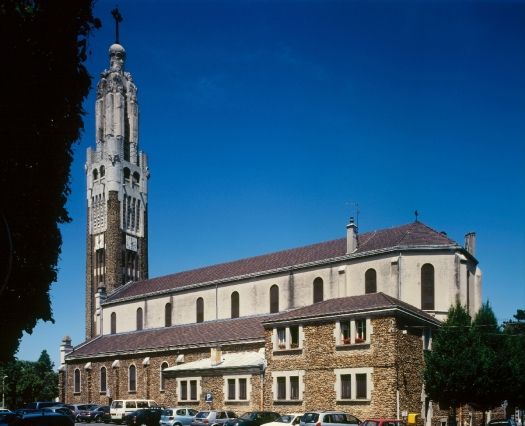 Archeological excavations have revealed that the primitive church in Villemomble was located on the corner of Ducatte square. Destroyed in 1670, the building was replaced by a new church built at the end of Rue D’Avron in a rather mediocre style. It was placed under dual aegis of Saint Genese, martyr from the fourth century and Saint Louis. The place was sanctified in 1699. During the eighteenth century, many restorations were necessary. Then, again from 1816 to 1819 several repair works were carried out. But the Church threatened to collapse and had to be shut down in 1900. It is on the site of the old church that a first building of affordable housing was built in Villemomble, a building that referred to art-deco style.

Dismantle the former seigniorial domain to build a new church

Construction of a new church was necessary and the Parish began to look for a suitable location. Miss Julie Outrebon, heiress to the domain of Villemomble on which was situated the former seigniorial castle (which is the current City Hall in Villemomble) associated with the mayor of that time, Constantin Louis Detouche, to dismantle the domain, and the heiress donated the land to be used for the construction of the parish in 1887. Construction work of the new Saint Louis church began in 1900. Built according to the plan of the Roman churches by the architect Georges Dumont, the building remained unfinished for lack of funds.

Though recent, the church preserved traces of the ancient Parish. After 1957, a cross dating from the fifteenth century was returned to the parish church after a laborious journey. This cross, that constituted suffering, was situated facing Saint-Genès-Saint-Louis on rue d'Avron, at the intersection of Chemin du Raincy and route de Villemomble. Removed in the nineteenth century, it was found leaning against one of the walls of the castle La Garenne (which does not exist today). In 1889, it was transferred to the church. When it was disused in 1900, a villager from Villemomble took it over. It remained in his family until one of his descendants restituted it to the parish in 1957. And, a marble inscription plaque dating from 1747 in Saint-Louis church, commemorates this important family in Villemomble. This engraved plaque evokes the request of masses in memory of Marie Catherine Charlet, lady of Mesmon, and her husband Godefroy de Romance, equerry to the king, and owners of the fiefdom of Bon recueil.

In 1923, the parish priest, Bernard Klein, took the initiative to build a tower bell for the church. The priest made the acquaintance of a sculptor from Toulouse Carlo Sarrabezolles (1888-1971), Grand prix of Rome. He requested him to design his project. The sculptor associated with the architect Paul Tournon, who was also to be the architect of Notre-Dame-des-Missions-du-Cygne d'Enghien at Epinay-sur-Seine, one of the Cardinal Construction sites. The two men achieved together a real architectural feat which became one of the major pieces of Sacred Art at that time. Resting on a porch which did not exceed six meters wide, the bell tower was 56 meters from the ground. It was made of concrete, bricks and millstone; it was crowned with a sculptural set of twenty eight concrete figures seven meters high each representing Jacob’s ladder in the bible. Its construction was contemporary like the church Notre-Dame, le Raincy, made in 1922-1923, entitled "the Sainte-Chapelle of concrete".

The difficulties of using concrete for such a work resided in the speed of the material drying. Besides the times constraint (about twenty four hours maximum for each sculpture) Sarrabezolles worked in difficult conditions since he carried out his work directly on the steeple, thus obliging him to work in a small space and subject to bad weather condition.

An ensemble attesting to a splendid interpretation of Gothic language

That aerial mise en scène of important saints and figures of Christianity testified to a powerful interpretation of Gothic language. Traditionally the Saint Bernard tower must be depicted by Abbot Klein and that Sarrabezolles himself be portrayed in its ensemble. At the top of the bell tower, an orthodox style globe, surmounted by an ornate wrought iron cross, overlooked the architectural ensemble. The cross was made by an ironmonger artist Raymond Subes. In the initial project, the enamels and blue-tone-glass artwork were to decorate the twenty eight figures, but the high budget of the operation left the bell tower in its natural state. It remains nevertheless remarkable. In 1954, the church choir was totally redone. The metallic architecture, forbidden to be apparent at that time, is masked by a vault. Huge frescoes by the painter Toublanc decorate it.