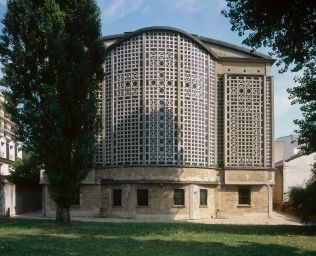 "Forest I was, Town I am" : Le Raincy, spanning over 224 hectares, on the edge of Bondy forest, was one of the first "French-designed parks".

"Forest I was, Town I am":  the motto which says all. Le Raincy takes its name from its location on the edge of Bondy forest (rain /edge of wood). The owners of Raincy were the lords of Bondy.  Jacques Bordier made it a princely estate frequented by Louis XIV.  Princess Palatine, the Sanguin family and the Dukes of Orleans lived here. The Castle fell into disrepair despite its restoration attempts byLouis-Philippe who donated it to his children.

In 1848, the estate was confiscated from the royal family and the estate became national property.  Subsequently, the castle was looted and the domain was subdivided and sold. Le Raincy was one of the first French designed parks, and it also inaugurated English style parks on the continent. From Madame de Sévigné to Napoleon, famous people stayed here. From this past remains a gentle kind of atmosphere, green paths and avenues created by the housing scheme of the nineteenth century. Le Raincy was established as a town by the Napoleonic decree of June, 20th, 1869 and became the administrative center of the canton in 1882, the canton-capital of the district in 1962, and sub-prefecture of the department of the Seine-Saint-Denis in 1964.

A must-see, the Church Notre-Dame, it is the first to be built in concrete in the world by the Perret Brothers in 1923. it is a landmark monument in the history of modern architecture, which, despite its recent construction has been classified as a "Historical Monument". The stained glass windows designed by Maurice Denis and made by the master glassmaker Marguerite Huré, and placed in the center of a cross are enhanced by screenwalling which allows light to pass into the nave. You can also see a synagogue in Le Raincy.

To organize your trip, browse through the list of hotels close to Le Raincy.