The Saint-Germain l'Auxerrois Church in Pantin 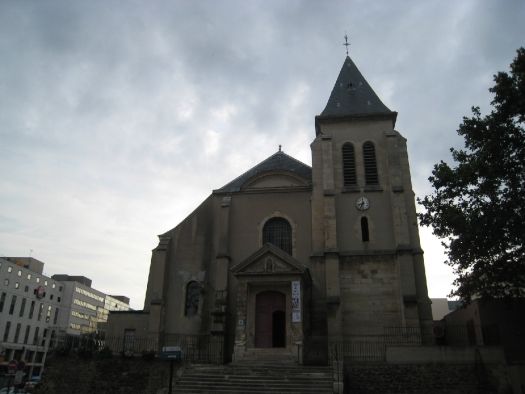 The first parish Church in Pantin was created following the arrival in Saint Germain village (around 378-448) of the bishop of Auxerre. The first real church probably dates from the twelfth century, but, in 1649, a royal decree declared it unsuitable for worship.

The church: in constant development

In 1662, the abbot of Richelieu and the priest Guillaume Carrelu undertook to rebuild the choir on condition that renovation fees be financed by the people of Pantin. The bell tower from the former building was preserved and the foundation stone of the new building was laid in 1664. During the following centuries, the church never ceased to go under transformation. In 1737-1738, the nave was covered with a barrel vault, while Joachim Beausire rebuilt the square tower to the south, which is still visible today. In 1826, a man named Villedoc was asked to "add a touch of elegance" to the church. He undertook consolidation work and added a porch topped with a triangular pediment.  In the twentieth century, the church threatened to collapse because of the unstable basement which endangered the foundations. Saint-Germain-l'Auxerrois was saved in extremis from destruction, decided in 1976, thanks to its addition to the inventory of listed monuments in 1978.

Work on the Church of Saint Germain began in June 2020 and is scheduled to be completed in February 2023 and includes :

The church posseses an oil panel painting dating from the seventeenth century, representing Christ and Saint Magdalena washing and perfuming his feet during a meal at the house of Simon, the Pharisee. This painting was attributed to Frank Le Vieux who died in 1616. The baptismal fonts in Saint-Germain of Auxerre were made out of marble. The red font contrasted with the gray of the base, enhancing the simplicity of its forms. Since renovation of the building, the baptismal fonts are now laid on a modern base. Finally, a tapestry made in 1959 by Plasse Le Gisne, based on a work of art done by Léon Zack, represents a crucifixion. In a schematic style close to abstraction, this tapestry was made in a chromatic range all in camaïeu which makes it a contemporary piece of art not so much in narrative but remains explicit.