Things to do and see in Pantin

Wondering what to do in Pantin? Attractions not to be missed and remarkable places of interests. Pantin offers an attractive hub of great choice for relaxing free fun activities.

The origin of the name of the city is a most controversial subject; it is said that the name Pantin come from "promptinum", a variant qualifying Pontines (see Pontines marshes in Rome).

What to do and what to see in Pantin?

Visitors can discover the town's heritage, visit a contemporary art exhibition, embark on a tourist cruise, catch a movie at an arthouse cinema, and enjoy a bike ride along the Ourcq canal... a promenade at Pantin offers more than a pole of attraction. The choice is yours!

The church of Pantin, built in 1664, is an important monument in the town, the whole neighborhood around the church is called “the church district”. Pantin played an important role in the history of wars with battles at the footsteps of the church. History relates the successful defense of the capital in 1814; the last Veterans of Napoleon successfully facing  the Russian and Prussian invaders near the church. A David A  painting representing this battle scene is still hung in the former council chamber of the town hall in Pantin. One hundred and thirty years later, defeated Nazi invaders passed once more in front of the church, fleeing the victorious upcoming army. The ringing of the church bells welcomed the arrival of the first Americans detachments…The Metro coming to the town in 1942, practically at the footsteps of the church linked the town of Pantin directly to the capital, the urban town to the district village where a big fair and flea market took place twice during the year. It is said that the smell of tobacco from the “manufacture de cigarettes” – cigarette factory, forecast the weather in the old days determined by the direction of the wind. 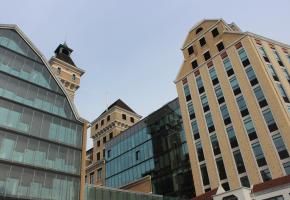 Les Grands Moulins de Pantin are an emblematic historical site in the north east of Paris. These beautiful beige building located on the banks of Ourcq Canal can be seen as far as the footbridge in Parc de la Villette as well as from the ring road; driving between Porte de pantin and Porte de la Villette. Located along the Ourcq canal since the 1920s, this former industrial building was completely renovated in the early 21st century. Architects have successfully managed to maintain the historical heritage structure in the restoration concept.

Pantin town hall  is situated at 84-88 avenue du General Leclerc. Inaugurated in 1886, this ideally located town hall skillfully blends new styles partly based on the past but with a definite look to the future.  The new architecture of the building was adapted mainly in the style of the late sixteenth century. The interior is richly decorated. The ceiling above the great stairs showcases François Schommer’s painting (1886) “La Paix et la ville de Pantin,” and Charles-Auguste Edelmann (1924) wall paintings, wedding hall venue, complemented by A.David patriotic artworks featuring a war-scene of Napoleon’s troops facing the invaders. Since 1994, all the administrative halls of the town hall can be found inside a building located on the other side of the avenue; this all-exterior-glass building designed by Jean Claude Donnadieu promotes transparency and symbolizes opening up to all the citizens of the town.

Between cinema, dance and contemporary art, enjoy some of the major cultural places in the town, a kind of "brooklynization" of the town so say certain people.

Centre National de la Danse at 1-5 Victor Hugo road is a four-floor establishment located on the banks of Ourcq Canal. Architects Jacques Kalisz and Jean Perrotet designed the building to showcase brightness and space. The Architectural connoisseur will recognize the characteristics of brutalist architecture, while others will find a Corbustier contruction. Pantin became an small fashion hub also; Xuly Bët, a Malian fashion designer opened his workshop-boutique at 8 Rouget de L’Isle road. Groupies and buyers from all around the world visit his provocative slogan boutique-workshop for “street fashion”. CND is also an event venue for business meeting locations, seminars and corporate events. 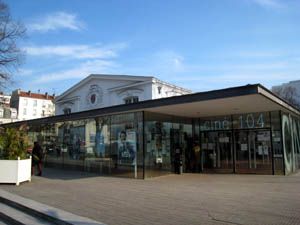 The famous Austrian gallerist of Thaddaeus Ropac had invested in the former boiler of Pantin to transform it into an international contemporary art gallery. The Ropac gallery specializes in the exhibition of huge monumental artworks. Regularly new exhibitions are held in the 2000 m² of the gallery: Kiefer, Ervin Wurm, Gilbert & Georges. The opening of this gallery at Pantin has been relayed in New York Times. This article referred to Pantin as the future potential. « Parisian’s Brooklyn ".

Pantin is also a fashion hub. Companies, prestigious brands have been implanted in Pantin. Hermès Sellier arrived in 1992 – this famous name of leather and leather goods brand, among others – was installed near Porte de Pantin and was the award winners in 2014 with l'Equerre d'Argent.

In 1994, the Malian stylist Xuly Bët had installed his workshop at 8 rue Rouget de l’Isle. Buyers and groupies of "street fashion" come from all over the world to visit the workshop-boutique with provocative slogans are now installed at Paris.

Go for a walk around the banks of Canal de l'Ourcq

The renovated banks around the Ourcq Canal Banks at Pantin are now a lovely space for walkers, joggers and cyclists. They also link Paris and Parc de La Villette on one side and Park de la Bergère to Bobigny on the other. Cultural and tourist cruises are available all year round.

Canal de l’Ourcq celebrates summer every year! Many events are organized on the waterfront as well as in the towns through which the canal flows: water-shuttles, festive theme cruises, city and urban tours, free concerts, free balls, Street-Art  exhibitions…It is also possible to attend these events in Pantin as the town hosts Antipode and Anako barges during the festival.

You are sojourning at Pantin and you are looking for a place to sleep? Consult the list of hotels at Pantin and the furnished rentals for a short stay at Pantin. To choose where to eat in Pantin, in town or along the banks of the canal, browse in the list of restaurants at Pantin. The town of Pantin is part of Communauté d'agglomération Est Ensemble.