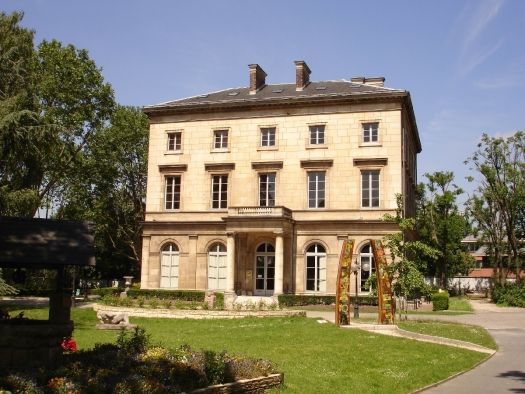 Since the Middle Ages, leading figures settled in the city of Saint-Ouen. In the 13th century, Guillaume de Crépy built a castle there that was then sold to Philippe de Valois. The financier and statesman Jacques Necker (1732 – 1804) owned a castle there. His daughter, the well-known Madame de Staël (1766 – 1817), lived in this city for many years. Nowadays, there are no traces left from these castles. Only the one built by Louis XVIII is still standing today.

Classicism of the first building

In the 17th century, Joachim Seiglières de Boisfranc decided to build a castle on his domain in Saint-Ouen, calling upon the architect Antoine Lepautre (1621 – 1691). Antoine Lepautre is named architect of the king thanks to the Cardinal Mazarin. He undertook several projects such as the Hotel de Beauvais in rue François Miron in Paris or the Château de Saint-Cloud for the king’s brother. The architect worked in Saint-Ouen from 1664 to 1669. Today, there is only the wrought iron fence left surrounding the terrace. Nevertheless, engravings by Israël Sylvestre, an important engraver from the 17th century, allow us to imagine the building composed of a central pavilion surrounded by two aisles, as classicism art required.

Throughout the years, different persons owned the castle: for example Madame de Pompadour (from 1759 to 1764) or Vincent Potocki, general of the cavalry and chamberlain of Poland. On May 2nd 1814, he hosted Louis XVIII at his return to France after Napoleon Bonaparte’s abdication. Louis XVIII signed, under the pressure of Alexander I of Russia and the influence of Talleyrand, the Declaration of Saint-Ouen admitting new liberties acquired during the Revolution, despite the re-establishment of monarchy. He announced at the Saint-Ouen castle the Charter of 1814.

In 1820, Louis XVIII purchased the castle. He made himself sketches of the castle and asked the architect Jean Jacques-Marie Huvé to build this building which will remain as one of the rarest property built in accordance with the Restauration architecture still standing today. Once the castle was over, Louis XVIII sold it to Zoé Talon, comtesse du Cayla. Jean Jacques-Marie Huvé (1783 – 1852) was also member of the Institut de France, and president of the Beaux-Arts. Eugène Viollet-le-Duc, architect of the Saint-Pierre Church and the Basilica of Saint-Denis, was one of his students as well as Gustave Guérin and Charles Laisné.

The pavilion of Saint-Ouen from the inside

The pool room is probably the most beautiful room of the castle. Moldings and gildings circle doors and frames. During the official opening on May 2nd 1823, the painter François Gérard presents four works on the theme of seasons and two paintings: Madame du Cayla with her children and Louis XVIII at his desk. The two paintings are now located at the Beauvau-Craon castle in Haroué, Lorraine. In the first quarter of the 19th century, the tradition wanted to display the pool table at the center of the room. Despite it is not there anymore, we can still see the six marble legs encrusted in the wooden floor. We access to the upper level thanks to a large staircase with a banister made of Cuban mahogany and balusters decorated with golden lion months.

When Zoé du Cayla past away in 1852, her daughter, the princess Beauvau-Craon, inherit the castle of Saint-Ouen. The city acquires the castle and a part of the parc in 1958 and is restored between 1963 and 1965.

The castle became the museum of art and history of Saint Ouen (musée d’Art et d’Histoire de Saint-Ouen) during the 19th century. The museum is now closed since 2005.