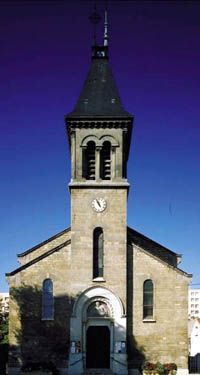 The location of the island known as Ile-Saint-Denis lent to it an extraordinary aura with the Seine determining its social and economic life. This large Crescent-like land hemmed in between two arms of the river, the bucolic banks that once inspired once Manet and Sisley, had long been assimilated to Saint Denis. However, even though the former village actually depended on the jurisdiction of the abbots of Saint-Denis; Ile Saint Denis had always been a village and then, an independent town with its own administration. Ile-Saint-Denis is the only river island with a municipal entity in France.

A cure (ecclesiastical office) on the Island

Up to the eighteenth century, the inhabitants of Ile Saint Denis had neither a church nor a chapel. They depended on the parish Saint Marcel in Saint Denis. This made it very inconvenient for them to worship because the chapel was very far and the way to get there only possible by water. Sunday Mass, death ceremonies or any other ceremonies remained impossible without a boat. After submitting several requests; the islanders received the authorization of Cardinal of Retz in 1620 to build a chapel, which, at first, was to be a sort of annex to the Saint Marcel parish. The new chapel was run by the priest from the mother parish. This uncontestable solution rapidly became inconvenient and the cardinal was resolved to turn the chapel into a parish church. A pastor was appointed to govern it, and in June 1668, the former “annex” officially became a cure (ecceslesiastical office) under the patronage of Saint Sebastian.

The authorities and worshippers were grieved by disrepair of the church

This first church at Ile-Saint-Denis, Saint Sebastian Church, was in terrible condition. On October, 5th, 1807, the municipality of Ile Saint Denis voted a subsidy in its budget to buy equipment and make repairs in the building in order to worship in better conditions, but also to allow the inhabitants of Ile Saint Denis to take refuge with their belongings and livestock during major flooding of the Seine river.

In January, 7th, 1826, the parish council (those in charge of the financial administration of church maintenance) consisting of village councillors including the mayor Mr Descoins, and Mr Butigier, priest of Ile-Saint-Denis and Saint- Ouen, got together. On that occasion, it was clear that the pitiful conditions of the ornaments and church equipment made impossible any religious ceremony worthy of that name. The parish was in a state of utter disrepair. The prefect of Seine himself drew the attention to the minister of the Interior pointing out that "the church in the town of Ile Saint Denis (which) is one of the poorest regarding the interior, and the few ornaments it has for worship are in such a pitiful state that it leaves the church authority and worshippers particularly grieved". The prefect asked for the parish to be saved. The minister of the Interior responded favorably to this request and made the amount requested available for the cure of Ile Saint Denis.

But repair works were insufficient. The increase of population required the expansion of the building. This expansion was difficult because « several parts of it were worn down to their foundations, hence the need to demolish it and build a new church. » In 1830, total reconstruction of the building was decided. As the building presented a real danger, the prefect ordered the immediate destruction of the bell tower and props to be laid on other parts of the church. The first stone of the new building of worship was laid on October, 18th, 1830. To save money, equipment from the old building was used to erect a new building under the direction of the architect Guénepin. On September 13th, 1832, the new church was inaugurated.

Saint-Pierre church, a church for boatmen

In 1859, less than thirty years after the inauguration of this new religious building, the church had already become too small. A larger building was needed, but the inhabitants were satisfied at first to simply make some repairs. But this could not last forever! People were upset. The population increased from 214 people in 1801 to 1730 in 1881. A new Church had to be built. A study was carried out to evaluate expenditure. Everyone was involved: the town, the department, religious ministers, the Archbishop of Paris and… parishioners. A large ceremony inaugurated the new church on September, 14th, 1884. Under the patronage of Saint Pierre, perhaps because of the fishermen that constituted the essential part of the population of Ile-Saint-Denis.

The building was in Neo-Roman style, fashionable at that time to “go back to” the middle Ages as could be seen with the construction of the church Saint-Denis-de-L'Estrée (1864 to 1867) by Viollet-le-Duc (who was then directing the restoration of the Basilica cathedral of Saint-Denis).

The facade of the church Saint-Pierre opened onto the Seine. The narrowness of its openings, its square tower pierced with twin bays topped by a round arch, were all explicit elements of this return back to the Middle-Ages. The inland waterways, omnipresent in the life of the inhabitants of Ile-Saint-Denis, was also the case for the place of worship of the parishioners. Thus, the baptismal fonts of the church Saint-Pierre made of bronze are in the shape of a ship’s bow. An ex-voto containing a boat was donated to the parish in the early twentieth century by a Belgian boatman in reference to a wish granted. Although inland shipping experienced a decline, the church of Saint-Pierre symbolizes and remains a place of worship for boatmen.