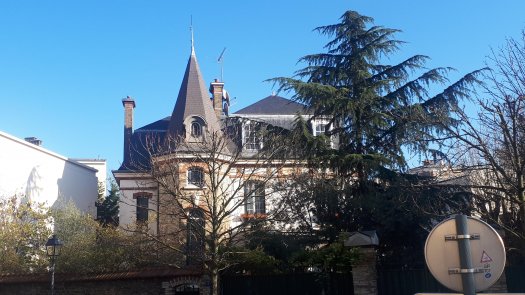 Despite having always lived in Paris, Paul de Kock (1793-1871) admired the atmosphere of the town Les Lilas where he successively bought several proprieties. He use to come with friends or alone to rest or to work in a peaceful environment.

Author of dramas, comic-operas, vaudeville and songs, Paul de Kock met with success through popular novels that he produced about students, grisettes and petit-bourgeois in a lighthearted style, almost salacious. In 1842, the writer bought a new property in the Wooded quarters which had not yet been divided into plots. Bigger than the previous ones, it had eight rooms and a billard room. The house was then situated in the middle of the woods. It was there that his wife died a few months later.

In 1845, the novelist acquired two acres of land in front of his villa and planted elms and oaks. He also constructed an open-air theater. The house that can be seen today at 6 avenue Paul-de-Kock is not that of the popular author. It was bought after his death by the Patrelle family, and a house was built on the same spot by the architect Alex Fournier. At that time, the former Bouleaux wood was cleared and part of it divided. The Patrelle property dates from 1897 and look like a kind of castle like those constructed on luxury sites at the end of the nineteenth century and beginning of the twentieth century.