What to do in Les Lilas near Paris center 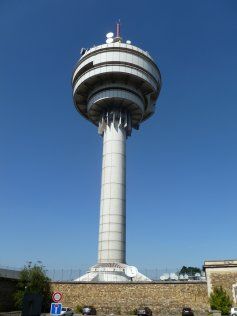 Nestled on a hill on the outskirts of Paris, Les Lilas, a charming bucolic urban city, with its narrow streets bordered by trees and fountains. The Fort of the city, crowned by the TDF tower (Télédiffusion de France), overlooks all of  “La Plaine de France”.

Named after the Arabo-Persian "lilâk", Les Lilas conjures up a wood full of Lilac, birthplace of the town, that covered the entire region up to the years 1840. With a surface of 126 hectares, the town has the same altitude as La Butte Montmartre in Paris – 128 metres..

In the thirteenth century the territory was mainly covered in woods and fields. The heart of the current town was a forest in 1780 called “Bois des Bouleaux” (Birch Wood). Parisians from the East of the capital used to come to this wood to find the rural pleasures of a bucolic city. Cabarets and Parisian dance halls -“Guinguettes” spread from 1820 on and the first housing estates were built in the woods. Thirty years later, 300 houses were built in the partly cleared wood. In 1867, Les Lilas was finally consecrated the seventy-first district of Seine Saint Denis region.

During the pivotal years of the nineteenth and the twentieth century, industries settled in the city and spread. After World War II,  the city developed very quickly. Today, Les Lilas welcomes traditional industries as well as many other activities in the tertiary sector. However, Les Lilas has always managed to preserve the legacy of its past that is still present in the town today. In 1884, the current City Hall was inaugurated and the Renaissance-inspired façade pierced by three monumental gates was designed by the architect P.Heneux. Lilac flowers fall over the marble columns supporting the balcony and stained glass windows. An octagonal bell tower crowns the building. Inside the building, the walls around the great staircase show two paintings by Edward Vimont(1846-1930). In 1889, Gleisz signs, for his part, the mythical bust of the French Republic. The city Council Chambers shelters the “Universal Suffrage” by Alfred Bramtot, the first “grand prix de Rome” that the Committee of the Beaux-Arts hesitantly accepted: the head of the Republic was considered “vulgar”. 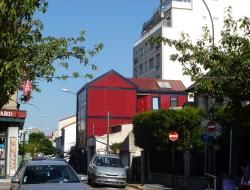 Benefiting from a dominant position on La Plaine de France between Saint Denis and Le Bourget, the Fort called Fort de Romainville was built nearly twenty years before the creation of the district Les Lilas. Occupied by the Prussians in 1870, and after that by the Germans from 1940 to 1944, it was used as a transit concentration camp to intern thousands of prisoners and hostages before deportation. The Germans deserted the Fort on August 20th 1944 leaving behind them eleven corpses ripped apart from a grenade blast.

At the wireless hertzian communication tower by the architect Vasconi, stands a huge mushroom of 108 meters tall which was completed in 1987. It has wireless communication facilities on three floors for radio and TV broadcasting to and from military and civilian satellites. It is also use for encoding

In the mid-nineteenth century, Arthur Henri Lambin, Count of Anglemont, annuitant, literary man and mayor of Les Lilas, built a mansion in the present day location Place de Gaulle. At his death, his heirs sold Hotel Anglemont to Marie Delorme, married name Gay. She founded the Gay institution and transformed the hotel into a boarding school. In 1893, the municipality bought the house which is now divided into a group of forty workshops, called Centre cultural Jean Cocteau. It was inaugurated in 1988 and is known as “Espace Anglemont”. The community hall known as Théâtre du Garde-Chasse shows a ceiling painted by the artist Victor Tardieu. The Little Vampire museum is located on rue Jules David. You can see church Notre Dame des Rosaires rue Jean Moulin.

Where to sleep in Les Lilas? Browse through our page devoted to Hotels in and around Les Lilas. Great accommodation for a stay in Paris or in the proximity of the children’s hospital: Robert Debré located in the 19th arrondissement of Paris.