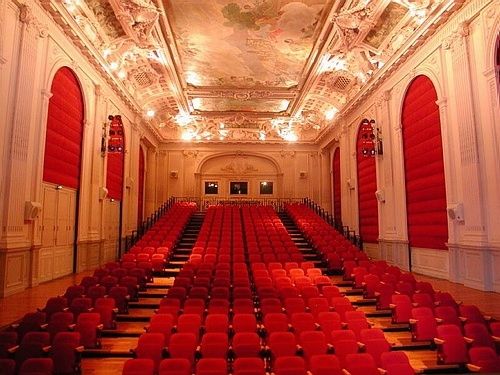 The architect Bévière was inspired by the Grand Trianon to design the Theater of Garde-Chasse Les Lilas. This IIIe République style monument emerged in the form of the community town hall in the early twentieth century.

Its ceiling is decorated with very beautiful paintings by Victor Tardieu, prize winner of the Prix de Rome, retracing the history of Les Lilas, representing in the background "une fête de nuit" a guinguettes party at Les lilas and at the front a painting called "va, petit âne" paying tribute to André Messager for his opera Véronique. In 1990, the painting of the ceiling and the stucco were classified in the Supplementary Inventory of listed Historical Monuments . You will be able to admire these paintings during the visit organized by Seine-Saint-Denis Tourism board - Comité Départemental du Tourisme. In 1994, the community town hall had been entirely renovated. It benefits since from modern scenic high quality equipment, allowing to host concerts, theatre plays and dance shows, or even contemporary art exhibitions, all made possible due to the modular feature of the venue.

The theater offers all year round a rich programme of theatrical and cinematographic shows and also offers circus shows and concerts on world music, baroque music or jazz.

A bar and a small catering service (quiche, tiramisu, etc.) from Baluchon, the catering service from Romainville, a result of the social economy and solidarity scheme, is available at 7:30, one hour before the show.