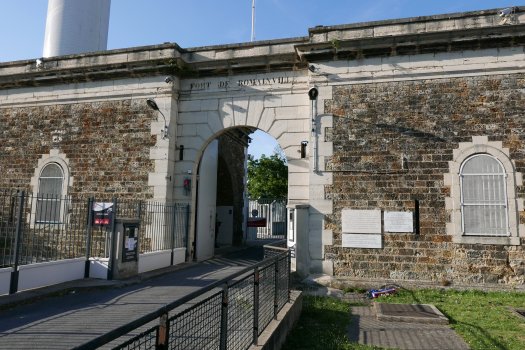 Fort Romainville, a Vauban type building is part of the detached line of forts on the fortification of Paris system developed in the middle of the nineteenth century. It had the particularity of having curtain walls most of which were casemated. A military defense, the buildings inside the compound were assigned to house officers (for 8 officers) and soldiers (a barracks for 300 men). There were also powder magazines, an infirmary, a kitchen, etc. The 37 casemates were occupied in part by artillery magazines. During the Second World War, from autumn 1940, it was used as an internment camp. The fort first interned people that were not to be judged in front of the military courts as well as powerful enemy nationals and prisoners of war. From August 1942, the camp also became a place to detain hostages in retaliation for the attacks by the Resistance. Annexed with the Compiegne camp, with which the fort of Romainville formed the Stalag122, the place became the point of deportation to the Nazi concentration camps from 1943. Following an administrative reform F122, in February 1944, the camp of Romainville became the starting point for women only to be deported to Ravensbruck. 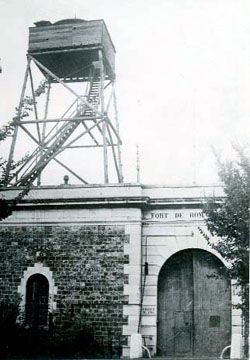 After the war, the French army took over the site. It immediately began to host commemoration ceremonies several times a year, including the annual ceremony paying tribute to the victims of deportation, every last Saturday in April. Site coverage of a military area in Paris, fortifications and Fort lines, aroused the interest of urban space planners in the Paris region at the beginning of the 20th century. In the development and extension plan of Paris, proposed by Louis Bonnier and Marcel Poëte in 1913, and picking up on an idea put forward by the social Museum, their appeared for the first time, a project to substitute the military network with a double network of parks and channels of communication. The "corniche des forts", emerged. The idea is still news today; it was brought up once again in 1995 in the Green plan Ile de France. The project of a regional park base Corniche des Forts is one of the links. Today the Fort is occupied by the TDF tower company who bought a parcel of land measuring 1, 783 sq. meters. Until 2011, the east and the north sides were used by the Ministry of defense for storage of the historical service of the navy archives, the air force and the marine museum collections. The move today is almost completed. A sale assignment of the land holding of the fort is to be expected.

An extract from the study » appreciation and networking of places of memory on internment and deportation in Seine Saint Denis » carried out by topography of memory ( Anne Bourgon, Hermine de Saint-Albin and Thomas Fontaine).