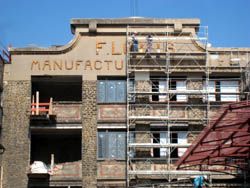 Administrative buildings and mansions, which represent the very image of business, were restored as they were located just next to the city. Accesses located on the canal side for goods conveyance are not as clean as the front facades. The Louis furniture factory, established in 1907 and built by Etienne Jacquin, is a perfect example.

Nevertheless, commercial buildings settling along the canal pay a particular attention to the ones situated on quays such as the BETC headquarters of Paris.

When the Parisian carpenter Frédéric Louis decided to create his own factory, he bought a land located at 37 – 39 rue Victor Hugo in Pantin and asked the architect Etienne Jacquin to construct the buildings. The result is remarkable. This plant is well-equipped in terms of security and environment. An ingenious system sucks sawdust and shavings to keep the place very clean while wastes are used as combustible. The architect used bricks as it was commonly used at that time and also because of the aesthetics. In fact, bricks had a certain style and it was cheap.

The buildings are shaped as a U surrounding a courtyard (called a “cour d’honneur” – main courtyard). We can find in both sides of the entrance accommodations and the janitor’s lodge, whereas the sawmill is located at the bottom of the 3-level building. The warehouse, stables and saddlery are located on each side of the U-shape building. The architect used ceramics to trace the front façade letters.