Magasins généraux, the warehouse complex of the Chamber of Commerce and Industry Paris (CCIP) settled on the banks of Canal de l'Ourcq in 1929 after enlargement of the canal for the creation of Pantin port. The port platform, managed by the CCIP Company, was made up of backfill from the old canal bed. Originally, the site was composed of two giant warehouses located on each side of the canal. Those on the left bank were destroyed by a violent fire in June 1995. The ones on the right banks have undergone successive transformations. Today the former customs building "Bâtiment des douanes", also called "Magasins généraux", is home now of the BETC company. This dramatic change is accompanied by the rehabilitation project the "ZAC" development project - Port de Pantin. 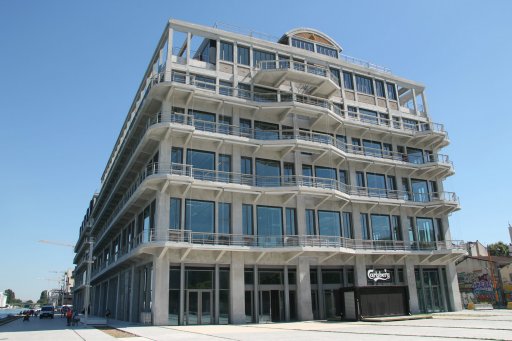 Canal de l'Ourcq, a hundred kilometres long between Mareuil-sur-Ourcq and Bassin de La Villette, opened in 1822. It crossed Pantin in the middle separating the village in two parts, but construction of two bridges restored communication. In a first phase, only galiots, long covered boats, circulated on the canal, carrying goods and passengers. Then, increasingly prosperous traffic gave rise to special flotillas, the "flûtes de Ourcq". Used only on this canal, and taking advantage of the fast current, thus avoiding human or animal traction. 28 meters in length and 3 meters wide, these boats could carry 40 to 50 tons of wood or construction material. 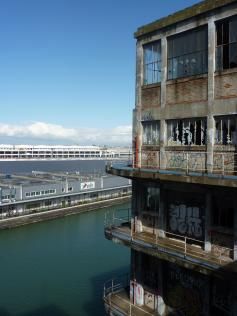 In his publication about Pantin, Roger Pourteau related that in 1837, two tour organizers had the ingenuous idea to create an iron cargo vessel, about twenty meters long, which provided a regular service between Paris and Meaux with two daily departures in both directions. Pulled by four horses, the cargo moved with a speed of four nautical miles an hour. Advertising posters indicated that "the lounges were heated in winter". The canal became too narrow and was no longer suited for traffic. Starting from 1892, the canal had to be expanded between La Villette and Mairie de Pantin, and afterwards, in 1895, this expansion was extended upstream. For these major improvement works including the widening and deepening of the canal, the municipality contributed up to 600,000 francs at that time. The commune hastened to absorb the costs of this considerable sum by establishing a "tonnage tax" on the goods loaded or unloaded in the port zone. At that time, traffic rose up to 95,800 tons per year.

In 1899 the Chamber of Commerce Paris, conscious of the major role played by canal de l'Ourcq, expressed their desire to move and settle in Pantin "suitable stores for each type of merchandise. This situation allowed boats and wagons to arrive without form filling authorizations for goods coming in or out and the city of Paris did not have to fear fraud. It would be, if we accept this expression, a wide triage basin". But, it was to take more than 30 years, for the basin water filling to occur on 10th May 1929. At that time the Bassin de Pantin became the most important port on Canal de l'Ourcq, able to welcome the biggest inland navigation boats from Rouen, via the Seine and Canal Saint-Denis.

These improvements were carried out in the context of an ambitious project for the expansion and extension of the canal to transform it into a navigation waterway for large barges. In early 1931, the two warehouse-stores became active, stocking various goods. 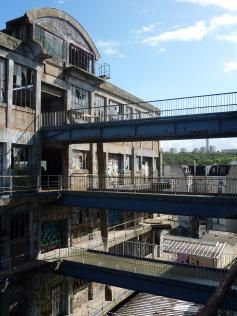 The CCIP Company warehouses were mainly used to collect grain and flour. The Chamber of Commerce and Industry Paris was, at that time, connected to the train stations Pantin and Noisy-le-Sec whose railways bordered the two banks of the canal. The two large warehouses that still dominate the right banks are particularly interesting from an architectural perspective. Constructed on six levels connected to each other by metal bridges, the structure is made of concrete and the facade filled with light gray brick and where the duotones form regular patterns. Large windows at the front light up the six floors while the horizontal aspect of the balconies emphasize its ship-like resemblance.

Grain was originally carried by boats. A pneumatic machine captured it directly into the distribution tower, located in the upper part of the building, while the cranes placed provisions on the balconies. Before becoming derelict, the Chamber of Commerce and Industry became a storage place for cargo coming from towns located in the north. For those arriving by road, a bus station was opened at the request of the customs administration in 1950. With the Grands Moulins de Pantin, the CCIP warehouses stand today as visible witnesses of the major role played by Seine-Saint-Denis and particularly Pantin in the supply of provisions for Paris.

On an architectural level, the volume layout of the buildings, which totals a surface area of 41,000 sq. m2, is very simple. For each one, it involves six identical plate stacks, accessed by the external walkways, overhanging the four facades. The whole framework of the two buildings is made of reinforced concrete. With money and elegance in mind, the constructor took care to increase the size of the poles from the base up like an expression of the transmission of the efforts made and the loads endured in the framework of the building. On the facade, it produces a very singular effect as every section of the pole changes at every level. On the ground floor, powerful columns support all the weight of the building and its content, whereas on the last level the columns are thinner, leaving thus more space for the polychrome bricks and glass surfaces.

The building "Bâtiment des douanes" a playground for street-art 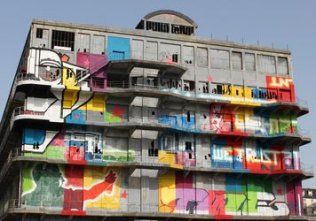 The customs building "des douanes" located in Pantin on the banks of the canal has long been a fantastic "playground" for various graffiti artists extremely active on this portion of the canal. As part of the summer festival program, Eté du canal, in 2012, three graffiti well known artists took possession of the outer wall of the building for their artwork: Artof Popof, Da Cruz and Marko 93. Their graffiti works were celebrated, through a collective artwork; a joyful transition from its former function to an artistic spot and its new life purpose. This link will offer you a virtual visit of the graffiti artwork on the old customs buildings "Bâtiment des douanes". 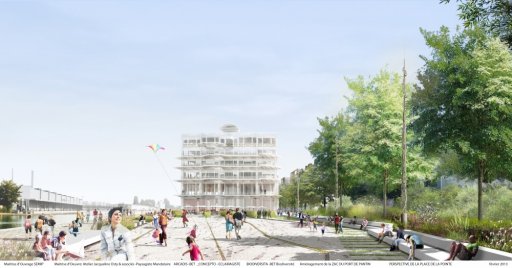 The industrial era is over; reconquest of the banks of the canal is the order of business. The project is part of the objectives to develop a new district identified on the local urbanism plan  such as the “ZAC du Port” – port development project, which will revolve around two main axis occupying not less than four hectares between the waterway and avenue Jean-Lolive. The twin buildings of Chamber de Commerce and Industry Paris have been renovated and are home to the BETC Company since September 2016. The building also houses Dock B, bar and restaurant La Bellevilloise. On the south part of the site, a residential space of 400 lodgings, leisure space and promenade paths is under development. If we include the former administrative centre which is now the National Dance Centre and Grands Moulins Pantin, reconversion of the CCIP site constitutes the coherent continuity in the heritage issue of industrial architectural development from Parc de la Villette.

The BETC headquarters is located at 1 rue de l'Ancien Canal, 93500 Pantin on the newly constructed square Place de la Pointe. To get to the Magasins Généraux building take the metro line 5, or an RATP bus which serves Église de Pantin, or why not the cycle path along Canal de l'Ourcq. The bus station  Église de Pantin, the metro station of the same name, as well as several Vélib' terminals are located jsut a few minutes away. The RER-train station line E is a little further away beside the town hall Mairie de Pantin (pedestrian access or vélib').